Terror dogs are found at the end of Tarn's Lair. They can be killed with level 40 Slayer, and players can access them very quickly using the "Tarn's Lair" teleport on the ring of slaying.

During The Lair of Tarn Razorlor, four of these need to be fought alongside some Animated Steel Armour and Tarn Razorlor. After Tarn Razorlor has been slain they are aggressive and will rush players in a Prayer-draining area that can create problems for the unprepared.

Terror dogs do not count toward fulfilling a Slayer task for dogs and are instead their own unique task. Their drops are very similar to the drops of green dragons, and are the only monsters that drop granite helms.

Terror dogs can be found at:

The lair's entrance is found in the Abandoned Mine and requires a salve amulet to enter. The fastest way to access the lair is to use the ring of slaying and selecting the 'Tarn's Lair' option, which teleports directly into the dungeon, with Tarn's room being directly north of the teleport spot.

The second fastest way is using Drakan's medallion to teleport to Burgh de Rott and then heading west to use the Agility shortcut to climb over the fence, climb over the cart, and enter the cart tunnel to enter the Abandoned Mine.

The third way is to teleport to Canifis, and go via the Myreque shortcut to Burgh de Rott. There is an Agility shortcut between the town of Burgh de Rott and the Abandoned Mine area.

Another route is the Burgh de Rott Ramble. Choose Pazuzu (strongest follower), and route 1, the easiest.

If players travel through Tarn's Lair, it is recommended to wear magic defensive armour, or bring prayer potions as the skeleton mages' magic attacks can hit hard. Before entering the room with the terror dogs, remember to equip melee armour.

Terror dogs are weak to slashing weapons and have very low Defence, however they are aggressive and accurate in their attacks. Players should be prepared to be attacked by multiple dogs at once, and may take damage very quickly. Tarn's Lair drains Prayer points at a rate of 10 points per two game ticks, or 500 points per minute (much faster than the Barrows), so it is best not to plan on using prayer. The dwarf multicannon and its variants cannot be used here.

It is highly recommended to bring plenty of food (monkfish or better), healing Summoning familiars or healing auras, and an emergency teleport. Players under 80 Attack/Strength/Defence might want to bring super sets.

It is recommended to bring a two-handed weapon with healing abilities, and good armour. The Saradomin godsword is a good choice as it is a slashing weapon. Halberds can also be used for their extra reach - at least a dragon halberd is recommended. A full set of Guthan's armour can be used as an alternative method, however the spear is a stabbing weapon resulting in slightly less accuracy. A combat familiar, instead of a healing one, can be helpful if players choose to use a Saradomin godsword or Guthan's set.

Use a set of basic abilities that include Cleave, and the threshold abilities Quake and Hurricane. Players should use these three abilities as often as possible, and keep in the middle of large numbers of enemy attacks. In addition, players may find Balanced Strike to be helpful to keep life points up.

A full Dharok's set is not advised here. Terror dogs are accurate enough that multiple attacks could seriously endanger a player trying to use Dharoks' low-life damage boosts. Prayer is drained too fast in these caverns to be reliable. Even with many prayer potions, it's far too easy for players to lose focus on their life points and die.

It is possible to line up the terror dogs in one of the side crevices in the room. With this method only one level 65 or two level 61 terror dogs will be able to attack at the same time.

Another option is to stay in the very back of the crevices. This allows only one level 61 to be fought at one time. Killing them with this method takes a long time, as after one is killed the player must wait for it to respawn. Moving near the crevice's opening to the central room can attract more into the crevice.

It is possible to safe spot terror dogs once they become unaggressive. The trick is to get the terror dog "caught" behind the torch. One can also use a halberd and trap them, exploiting their weakness to slash weapons. 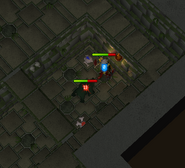 The safe spot at the torch.

The safe spot in the cage. 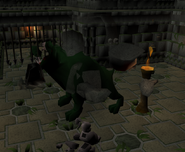 Tarn turns a statue into a terror dog!