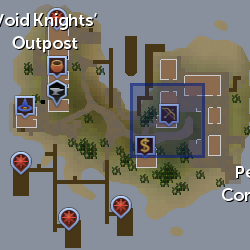 Terry Gord is a resident at the Void Knights' Outpost, being the son of a deceased knight. He lives there with his mother, Mrs Gord.

He is friendly with Knight Mikhal and Mariah. Terry attempted to ensure that Mariah did not bother Mikhal, which led him to believe they were having an affair.

He wants to become a Void Knight, but his mother refuses to let him train after his father was killed. Throughout the quest Quiet Before the Swarm he is constantly frustrated by her smothering attitude, breaking her vase. After the quest, his mother reconsiders letting him train, though he himself is now conflicted between honouring his friends and the loss of life in the struggle.