While Guthix Sleeps
Ritual of the Mahjarrat
The World Wakes

An experienced and high-ranking druid.
Please add a map!

Thaerisk Cemphier is the current leader of an underground organisation of druids called the Crux Eqal and the author of the Book of the Underworld. He is heavily involved in the While Guthix Sleeps quest. He can be found initially upstairs in the house with the 'crystal key chest', just west of Pikkupstix in Taverley. After the player talks to him for a while, two Assassins will appear and attempt to kill him and the player. He uses earth spells when defending himself. When the player kills them, Thaerisk requests the player to go to Varrock to continue the quest and offers to sell them a Snapdragon seed later in the quest. Afterwards, he moves to the White Knights' Castle and remains there upon completion of the quest.

He also appears in Ritual of the Mahjarrat quest, the sequel of While Guthix Sleeps. Near the end of the quest, Sir Tiffy Cashien wants to hide the Stone of Jas again. To teleport away the Stone, he summons Thaerisk. Together, they manage to teleport the Stone of Jas to an unknown location, which it is later retrieved from by Sliske. After the quest, he returns to Taverley.

He is one of the Guthixians summoned to defend Guthix during The World Wakes. He teamed up with an adventurer and the fairy slayer master Chaeldar to fight off the champions of Bandos and Zamorak, facing either General Graardor, K'ril Tsutsaroth or one of the Mahjarrat Enakhra or Zemouregal. If he faces either Mahjarrat, he may die. After defeating the champions, assuming he survived, he rejoined the other Guthixians in defending Juna from Commander Zilyana's forces. One of Guthix's Guardians, the automaton Cres, was slain by the icyene. The forces of Zaros arrived and a fight broke out on what to do about Guthix. They located Guthix, but were too late to help him as he was killed by the Mahjarrat Sliske. In his dying moments, Guthix appointed a new World Guardian. Thaerisk returned back to his post, determined to fulfil Guthix's dying wish, or was replaced by a druidess if he was killed.

He says he has lived in Taverley most of his life and was initiated as a druid ten years before the events of While Guthix Sleeps. He claims to have travelled around most of Gielinor and seen tragedy and heartache, triumph and beauty. He also feels that many of his fellow druids are a bit too absorbed in local matters and should look at the larger picture, and thus organised Crux Eqal. He says he feels angry that while weaker people suffer, stronger people oppress those weaker people. 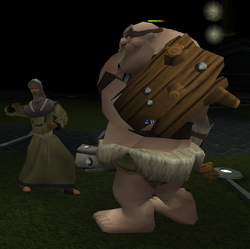 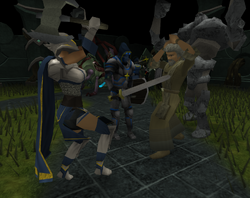