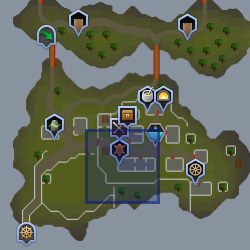 Thakkrad Sigmundson is a Fremennik craftsman from Neitiznot. He is located in the building directly south of the bank on the island, standing in the south-western corner of the burgher's room.

He can cure yak-hides for 5 coins each to make cured yak-hides. To do this players must have started the The Fremennik Isles up to the point where they are preparing for the fight. After the quest, players can have him cure yak-hides by right clicking him and selecting Craft-Goods. An alternative method is to use yak-hide on him which can skip one dialogue screen.

The Fremennik are based almost entirely on Viking culture, thus Sigmundson actually means Sigmund's son (Sigmund the Merchant, not Sigmund in the cave goblin saga). This means it is likely that Bork Sigmundson is probably Thakkrad's brother.

Retrieved from "https://runescape.fandom.com/wiki/Thakkrad_Sigmundson?oldid=24562384"
Community content is available under CC-BY-SA unless otherwise noted.