Thalassus is a sea monster that originates from the Wushanko Isles and is featured in the Deadliest Catch quest.

In the quest, the player, Jones and 'The Guns' sail out to the Northern Sea to try to catch Thalassus, who is terrorising all boats that pass by.

Jones has the player find a special harpoon, a sea chart, and a rower ('The Guns') to help aid their journey to sea. Once there, they follow a trail of wrecked boats to Thalassus's location to begin the hunt.

As Jones starts to throw his harpoon, Thalassus knocks Jones and the player overboard. Jones is swallowed alive while the player washes up on a nearby island. On the island, the player meets three mermaids. After the player persuades them that Jones will kill them all once he's released, they reveal that if Thalassus is fed poisonous karambwan, he'll get sick and spit Jones out before he is slowly digested. After 'The Guns' feeds Thalassus karambwan, he releases Jones and swims away. Jones decides Thalassus is too hard for him to catch, so they row back to shore, thus ending the quest.

Some missions in player-owned ports involve hunting him, and some of them even involve actually befriending the beast.

After the quest, players can hunt Thalassus ten more times with increasing difficulty for Hunter experience, a total of 46,660 experience. To begin these hunts, talk to Jones outside the bank in the Fishing Guild. During the last three hunts, the sea wind will blow and disorient the player, rotating the camera's viewpoint. Players can easily correct for this by rotating back to face north. Once it has been hunted ten times, Thalassus will flee to another part of the sea and is unable to be hunted again.

Hunting the Thalassus 10 times after the quest is a requirement for obtaining the completionist cape and the master quest cape.

* If the player turns their run energy off then no energy will be consumed. During the activity, 'The Guns' energy is equal to the player's run energy. The Oo'glog salt-water spring spa can be used for 10–25 minutes of practically infinite energy for 'The Guns' to use.

While the path changes for each hunt, the location of the shipwrecks is fixed. This blank map may be used as an easier way to track down the Thalassus. It is recommended to mark each shipwreck which leads the player along the trail.

Each time players hunt the Thalassus, they should aim for these items from the wreckage. They can only obtain one set of 16 blood runes, 5302 coins and 17 law runes each hunt but can get multiple uncut rubies, green dragonhides, and adamantite ores.

The Thalassus made a brief appearance in a tale of the Arc Jed Hunter, where it ate Jed "The Iron Link" when he tries to escape from the player.

What's My Name? was a competition on the RuneScape Forums to name Thalassus.[1] The best selections were chosen and the names, on 20 May 2011, were put in a Guaranteed Content Poll. The option that received the most votes appeared in-game. Another name candidate, Crackjaw, was referenced in Deadliest Catch as a fantastical creature Linza and the other Signature Heroes had been duped into hunting in the wilderness. 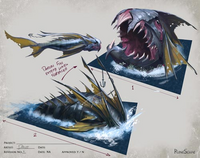 Thalassus jumping out of the sea. 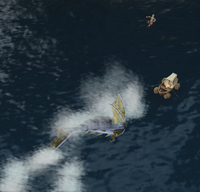 Thalassus throwing Jones back into the boat.

The Thalassus opening its large mouth.