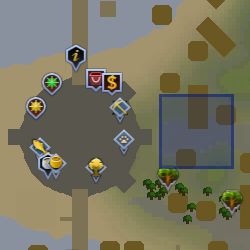 Lidylla the Architect is an adventurer found in the Player-owned port minigame. She is from Wushanko and travelled to the west in order to learn new building techniques which she hopes to use to repair her destroyed hometown. She can be unlocked and give special voyages to the player running the port if the player has 90 Construction. The Architect can be unlocked through the tutorial or a special voyage.

Previous storyline cutscenes can be replayed by talking to Lidylla when she is in the port.

Lidylla is an architect from the Wushanko Isles. Her home island is being rocked by earthquakes, and so she has come to study Western building techniques, with a specific interest in Lumbridge Castle, which survived a blast of "some force".

Lidylla gathers several building techniques from the West, and seeks to return to her town to inform the elders; her main objective is to scout other islands that may have experienced the earthquakes, and learn how they did so. Upon return she concludes that her town has focused architecture more on aesthetics over resilience, and that construction has begun while she returns to the Varrock Museum to study, claiming it is possible that Misthalin has survived such earthquakes.

Lidylla has heard rumours of a new, strong material that could save her town, and seeks to leave as soon as possible. Upon return she states the voyage was not worth it; the material was doused in salt water and became extremely weak, rendering it useless.

The portmaster receives a request for Lidylla to return immediately from her hometown. There was a new discovery: A sample that contains all the properties Lidylla requires. Upon studying the material, she concludes it is a mineral that can dissipate vibrations endured during earthquakes. There is one setback however: there are only small amounts of it found due to a lack of a source. The earthquake in her hometown has gotten worse to the point that some coastal buildings have slid into the ocean, leaving many citizens homeless. The portmaster asks the crew to seek more of the material, while Lidylla continues to study.

Lidylla's hometown is planning a full scale evacuation. Lidylla requests a ship to visit the place where the sample was found, and upon return, only located a weaker version of the material.

Lidylla finds a way to obtain more of the mineral: the false, weaker material vibrates violently when close to the real, stronger material. The portmaster sends out a ship, and her hometown is saved. She found enough of the material to reinforce key structures around the area. She also discovers that the false, weak mineral was alive. When she put it down next to a plant, the mineral morphed into the same plant. She concludes it camouflages to blend it with its surrounding environment, and that the vibrations are its reactions to various stimuli. She passes it to scholars to study, and instructs her mining crews to be careful as the creature could be an endangered species. She seeks to locate more of the material, and requests the portmaster to inform her if more is found. Completing this voyage earns 12 Pearls and 12 Koi Scales.

Lidylla prefers to work with The Missionary, as she wishes to talk about something other than boats or killing things. When both adventurers are in port, their joint voyages are available in the special voyages list.

Additionally, when all of her, The Trapper and The Chef's story voyages are complete, trio voyages become available when two of the trio are in port together.

She can also be found on Waiko, among some houses.

Retrieved from "https://runescape.fandom.com/wiki/The_Architect?oldid=20973897"
Community content is available under CC-BY-SA unless otherwise noted.