Surula the sea orphan. She works behind the bar. 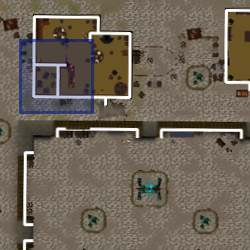 Surula is a sea orphan barmaid working in the pub in the Player-owned port. She sells beer for 1 coin and can tell players about her affliction and sea orphans. She can also provide an extra voyage every Thursday based on the gossip she hears in the bar. Surula also hosts a random port event in which the player helps her serve beer to bar patrons.

After completing a voyage, players will sometimes receive the following message: "The Barmaid had a tricky time while the Ship was away. Speak to her to relive the events." For this minigame, the player takes control of Surula and must serve beer to 20 clients in the bar area, upstairs, and nearby outside, all in fewer than 10 minutes. Surula can hold only 2 beer glasses at once so she has to return to the bar to get more after serving every two customers. Once a client has been served, the "Serve Patron" option will no longer appear on the client. This is a good indicator of whether the patron has been served already or not.

If the player disconnects during the event, it'll count as a loss, earning no rewards.

Each week, between Thursday at 00:00 UTC and Friday at 00:00 UTC, the player can ask Surula for gossip. Gossip may not be obtained on any other day of the week. The gossip takes the form of a voyage called A Barmaid's Tip. If accepted, it is placed in the third standard voyage slot, replacing the voyage there, if any. The adversity and reward for the mission are influenced by, but not completely controlled by, the currently selected port management focus. The table below shows the adversity and reward for A Barmaid's Tip in different regions.

Retrieved from "https://runescape.fandom.com/wiki/The_Barmaid?oldid=24564841"
Community content is available under CC-BY-SA unless otherwise noted.