The Eyes of Glouphrie is a quest revolving around yet another plot against the Grand Tree gnomes, this time not by Glough, but a much more feared figure from gnomish history.

After you foiled a plan to destroy the Grand Tree things have been quiet in the gnome world. Brimstail has found a strange machine, built by Oaknock the Engineer, during the gnomes' Golden Age. What does the weird device do? Why on RuneScape was it built? If you agree to help this gnome get his confusing device working, you will learn a little about gnome magicks, gnome history, and you will start to uncover a new threat (or is it an old one?) to gnome security - a threat that is a lot harder to see...

Travel to the south-western area of the Tree Gnome Stronghold and enter Brimstail's cave. Talk to the gnome wizard, who starts to chat about his new cute pet that unknowingly wandered into his home, and has since been his closest companion. Ask him about his profession, to which he replies "I research the Arcane", synonymous to studying magic. Although most gnomes consider magic as a taboo, Brimstail says that this wasn't always so and offers to share some gnome history with you. Accept.

Eons ago, during the reign of King Healthorg, there was a gnomish mage by the name of Glouphrie, occupying the post of the King's Advisor. Glouphrie was known for his skills in light magic and illusions, which led to suspicion amongst the gnomes, gaining him the title 'Glouphrie the Untrusted'. One amongst them was Oaknock, the great engineer that built most of the Stronghold, who disliked Glouphrie and never saw eye-to-eye with him on any issue.

Ending his tale, Brimstail requests you to enter the next room and have a look at whatever you find in there.

Enter north-west into the inner cave and inspect the singing bowl, use the exchanger and the machine, and look at the panel. Head back and tell Brimstail about your discovery, to which he says that that room belonged to Oaknock himself and it was where his workshop was located. Noting the elven nature of the bowl, he finds himself at great loss in explaining it, although he remembers someone who knew Oaknock, the King and Glouphrie himself - Hazelmere.

Brimstail asks you to talk to him and gather as much information as you can on Glouphrie. When you object, saying that you'd need to go through the tedious job of dictionary-flipping again, Brimstail calmly says that Hazelmere would eventually find a way to communicate as he loves to talk about the olden days.

Hazelmere is located on the island chain east of Yanille. There is a fairy ring directly beside his hut, code cls, and the Yanille lodestone is quite close too. An alternate way is to cast the Watchtower teleport at level 58 magic.

Speak to Hazelmere; at first he blabbers incoherently, but eventually starts to poke inside your mind, enabling you to communicate with him. Hazelmere will ask you to clear your mind and think of nothing, so he can show you his memories of the gnomish history.

During the Fourth Age, Healthorg had just become King and the gnomes occupied most of the northern regions, with the south inhabited by goblin tribes. Aiming control over the land, both the races eventually met in the Battle of Atarisundri. Easily outnumbered by the goblins, Glouphrie came up with a plan to use his special illusions to scare the goblins away from the land. He summoned an army of giant tortoises, successfully intimidating the goblins into retreating and thus gaining victory.

Shortly after this, Hazelmere recounts having a very special, old friend in a spirit tree, Argento. One day, he sensed the Anima Mundi leave his dear friend, although the "weather was fine and dry". Sure that one of the Old Ones had died, he conveyed his concerns to Oaknock, who immediately accused Glouphrie and his illusory practices. Oaknock, along with help from the elves, created an anti-illusion machine to dispel the illusion cast on Argento and prove Glouphrie's treachery.

Calling upon the council to the spirit tree, Oaknock switches on the machine and reveals the true nature of Argento. The King, furious at his audacity, banishes Glouphrie from the stronghold. According to rumours, Glouphrie went on to create the city of Arposandra and shrouded it in mist.

Hazelmere deduces that since the machine used elven magic, it must probably be operated by some sort of crystals. He hands you a crystal disc for help in using the machine.

Go back to Brimstail, and share with him all that you've learnt so far. As you are talking to him about crystal discs, a saboteur enters the dungeon and wrecks the machine. After the cut-scene, head to the broken-down machine and inspect it - "it looks like it was made with 2 types of wood and a glue that smells like a pine tree and held together with something sticky". You need the following to repair it:

Grind the mud rune to get some ground mud runes and mix them with the bucket of sap to produce magic glue. Use the glue on the machine to fix it.

To save time, talk to Brimstail and get all the crystals from him by choosing "I can't work out what to do with these discs!" several times until he runs out of discs. The puzzle in the machine is different for every player.

The machine will present a number on the front. This number corresponds to the value of crystal that must be inserted to unlock it. The following table lists the value of each crystal.

The value of a crystal piece is the product of the ordinality of the colour in the rainbow and the number of sides the shape has. For example:

There is an Oaknock's exchanger on the right, which allows you to insert and exchange discs of equivalent value. You will always receive the same value back, in different discs. If you can't use or don't like the discs offered to you, you can press the double grey arrows again and you get a different combination of discs.

For example, inserting a green square (16) into the exchanger can give you a blue triangle (15) and a red circle (1) as one of the many different combinations.

To insert a shape, click on it from your inventory to make it appear in your hand, and then click on the coin slot icon. Click the small green square to submit the crystal disc.

The operating panel requires 6 separate discs adding up to 3 different numbers. The first one must be exactly equal to the value of the disc used. The second must be a combination of two discs, and the third, a combination of three discs.

You can speak again to Brimstail to receive more discs, as the original amount may not be sufficient to unlock and repair the machine. If Brimstail will not give you additional disks, check your bank. It's possible you found some in your travels.

Once you have unlocked the machine, the once "cute" creatures transform to "evil" creatures, which leads you and Brimstail to the conclusion that the creatures are spies and were responsible in the manipulation of the machine. Brimstail tells you to inform King Narnode of the espionage.

Kill the evil creature in Brimstail's cave and talk to Brimstail. Deliver the news to the King, who believes you and requests you to kill all the remaining spies. There are six creatures in total, and they have only 1 life point each:

Finally, talk to King Narnode again and obtain your reward. 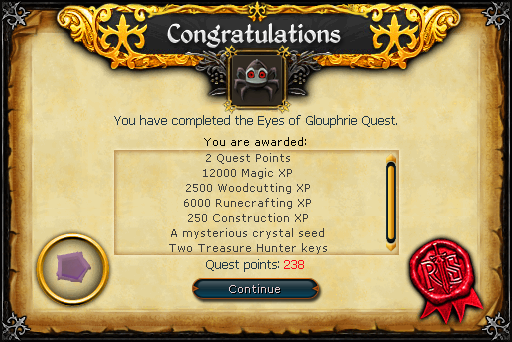 Completion of The Eyes of Glouphrie is required for the following:

Argento's Death
The unlisted track that plays during the cutscene where Argento dies.

The Silver Spirit tree is Dead
The unlisted track that plays during the cutscene where Argento's death is revealed.

Izzie revealed
The unlisted track that plays during the cutscene after the machine is fixed.