Start a Wiki
For the music track, see The Harmony of the Runes (music track).

The Harmony of the Runes

No
Rune Mysteries
No

You can find another copy in the Wizards' Tower library.

A book from the Wizards' Tower.

The Harmony of the Runes is a book about the relation between runes and music. It was written by Archmage Perien. This book is used to find the Wizards' Tower basement key, which is used to access to the ruins beneath the Wizards' Tower. It can also be found in a bookcase in a player-owned house.

The following text is transcluded from Transcript:The Harmony of the Runes.

By Perien, apprentice of Unaia, First Archmage of the Reborn Tower

It is already well known that the harmonies of music are expressed in the motions of the heavenly bodies, but I believe that they can also be found in the relationships between the runes of magic. This I have proven to my satisfaction by both reason and experiment, and it is further confirmed by Samuel Scourdrel, who writes in his Third Voyage that the elves of the western lands can shape magical crystals by sounding harmonies on enchanted flutes.

Just as there are twelve notes of the chromatic scale, there are twelve rues used in the magic of the tower: mind, air, water, earth, fire, body, cosmic, chaos, nature, law, death and blood. Some have theorised the existence of other runes, but they do not figure in the Harmony.

We can therefore assign to each rune a pitch, beginning with mind=A, then air=A♯ and so forth up the scale (see attached diagram).

for the apprentice learning the spellbook of the tower, this linking of magic and music provides an aid to memorisation, since the runes used for each spell can be expressed as a melody. It is for this reason that I have commissioned the building of a pipe organ in the tower library.

I submit, however, that the Harmony of the Runes is also a profitable contemplation for the experienced wizard, and that mediation on the music of magic can provide a key to the deeper levels of the Rune Mysteries.

Right-clicking the book gives the option of viewing a diagram. 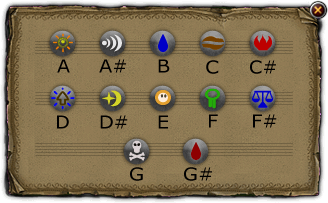 Retrieved from "https://runescape.fandom.com/wiki/The_Harmony_of_the_Runes?oldid=24547723"
Community content is available under CC-BY-SA unless otherwise noted.