The Light Within is a grandmaster elf quest, and the tenth and final quest in the series. It was previously proposed to be released on 17 August, but was eventually pushed back to 24 August 2015. It was developed by Mod Ollie and Mod Raven, and was released alongside Seren-themed prayers and spells, and the discovery of Tarddiad.

The central focus of the quest is the return of the crystalline goddess of the elves, Seren, by helping the elven elders find and reunite her component shards.

To start the quest, talk to Eluned in the Ithell district of Prifddinas, north of the player-owned house portal. The screen will start shaking as she questions Seren's arrival, worrying that the city will collapse. She requires your help in forming Seren.

Go upstairs in the Tower of Voices and all the clan leaders will be there, along with Seren in the middle. They will debate whether they should reform Seren or not, and they will give you the option whether to reform Seren or not. It doesn't matter which you choose, either option will result in Seren's reformation.

After choosing, they will wonder as to how they will reform Seren. Lady Trahaearn will suggest using the Enchanted key. Give her the key and she will attune it to moments in time relating to Seren.

Return to the past

Now you must follow the path which the Enchanted key takes you. This can be found by feeling the key, but the position is the same for everyone. It will lead you to Guthix's Cave at Guthix's corpse, easily accessible through the Sixth-Age circuit. Upon arrival, walk towards Guthix's corpse, stand on the platform before him and rub the key and you will be transported back in time.

Guthix will be there. Talk to him and pick any dialogue options. He will talk about the Enchanted key's origins and how to restore Seren. He suggests reconstructing her major shards through elven magic and replacement crystal. However, Guthix also notes that they are being spied on. He asks you to find out who it is.

Go up the steps and find Haluned to the north-west. She will recognise the player from Meeting History, and you may talk to her to find out that she is the twin of Eluned. While trying to talk to her further, she will teleport away, and Guthix will summon you again.

Guthix believes that Eluned is her twin, and because of that, the player will need to make a difficult choice later in the quest because they are both shards of Seren. After talking to Guthix, you will teleport back into the present.

Finding the major Shards of Seren

Return to the top of the Tower of Voices, where each leader will mention that two clans hold one major shard of Seren. Amlodd and Hefin, known as the Spiritualists, hold one shard. Crwys and Meilyr, known as the Naturalists, hold another. Cadarn and Iorwerth, the Military, hold a third, and Ithell and Trahaearn, the Artisans, hold the final one.

Talk to the clan leaders in the respective groups to find out where the shard may be hidden. Some of the leaders will redirect you to their elders due to an issue (age, trust, etc.), so you should talk to the elder clan leaders to save time. The shards can be collected in any order.

The Elixir of Revealment potion is obtained from mixing a grand defence potion with a wintercup mushroom and a bloodcap mushroom.

Talk to Coeden in the Crwys district. He will tell you that you need the wintercup mushroom, which he will give you after you listen to his story. To stay awake, click on the elven clan icons that appear on the screen as he is narrating you the story. The bloodcap mushroom can be found just west of the Tirannwn mushroom farming patch. Once the eyelid screen has gone black you can move Coeden's chat screen to see the icons better.

Use both mushrooms on the potion to create the Elixir of Revealment. The potion must then be used on an active Crystal tree to reveal a cave entrance. If you have access to the Max Guild, you can attune one of the portals to take you to the active crystal tree. Once you find it, use the potion on the tree and a hole will burst from the ground. Climb down and take the shard from the roots.

Travel to Lletya (teleporting with a crystal teleport seed or by a similar method) and equip the Trahaearn exoskeleton set. Investigate the well in front of the Ithell Statue, and climb into it. Trahaearn automaton mk V is encountered guarding access to the shard, and it will not let you pass. Wearing the Trahaearn exoskeleton set makes it confuse you for Lady Trahaearn, but it will still ask you some questions to ensure you are not an imposter.

Once the questions are successfully answered, the automaton will go into a passive observation mode in a corner of the room. Take the shard from the singing bowl in the room.

Three of the same light cores are required, which are obtained from cleansing shadow cores in the Amlodd district. Shadow cores are an uncommon drop from all types of shadow creatures, and thus it can take up to 20 minutes to get 3 light cores.

Walk up to the Hefin Cathedral and there will be a chatbox option to purify the corrupted seren stone upon entry. Lady Hefin will start the ritual by using poses found from the Serenity posts, then say an incantation which must be followed. If you mess up the incantation, you must start back from the poses. Three poses then incantations are used, which will increase to four and five respectively as you progress through the ritual. If you have difficulty memorizing the incantation, you can write down the first letter on a piece of paper to help you through the process.

After completing the incantation, you will be given a seren shard (wisdom).

Items needed: Glarial's amulet, a rope (obtainable from a rope rack) and A key (Waterfall Dungeon) (obtainable during this section)

Travel to Baxtorian Falls with Glarial's amulet, and enter the Waterfall Dungeon under the falls. The dungeon can be accessed by boarding the log raft west of Almera, using the rope on the rock, and using the rope again on the dead tree to get onto a cliff with the entrance. Go into the eastern room and search the northern crates for A key (Waterfall Dungeon). If you previously had the key in your bank, and attempt to use it, the door will not open, you must search the crates. Read Baxtorian's journal if you haven't already, and then go into the northwestern room and use the key on the door and Arianwyn will appear.

Investigate the statue of Baxtorian. Arianwyn will chant an incantation which will make Baxtorian come back to life. Baxtorian explains that four pieces of the Song of Restoration must be found in order to revive Seren, and gives you one piece. You will gather the other pieces throughout the rest of the quest. After asking him where the shard is, he will turn the statue of Glarial into the shard you are looking for.

Return to the Tower of Voices with the four shards. A cutscene will occur where Seren needs your help, and you will obtain the second piece of the song.

Go back into the Tower of Voices and return the shards to each leader. However, Lord Iorwerth will mention that the shard of the Dark Lord (Haluned) and Eluned need to be used as well.

Go to Morvran and ask to be taken to the Grand Library. Go west through the door to enter the Grand Library. In the very south-west corner, take the shard. You will be given a choice to include the dark Seren shard in the restoration of Seren. If you include it, you will take the shard. If you don't include it, you will kick it into the abyss. After making your decision, return to the Tower of Voices. All the main crystals are collected, but the elders cannot recreate Seren without filler crystals, and tell you that Tarddiad may have what they need, although it may be dangerous since it has been thousands of years since they were there.

Items needed: Combat equipment and some food if you wish to get the crystals by defeating shapeshifters.

Teleport to the World Gate with the Sixth-Age circuit. Rotate the dials until a number "1" is presented on the Gate. This is the portal to Tarddiad. Step through it and a cutscene will occur where Seren regrets going to Gielinor. The third piece of the Song of Restoration is remembered here. Upon entering, after stepping a little further from the portal, a Crystal Shapeshifter will attack you.

50 Tarddian crystals need to be collected. Crystal fragments can be obtained from mining solid crystal, chopping branching crystal or fishing floating crystals, which can be exchanged with Angof for Tarddian crystals at a rate of 3 to 1. Alternatively, you can kill Crystal Shapeshifters around Tarddiad, who drop 2 crystals upon death. However, the shapeshifters are more challenging than their combat level suggests and it may be better to collect fragments instead of killing them. You can speak with Angof to increase the amount of shapeshifters around Tarddiad; it can always be reset to normal by asking her to send them back.

Speak to Angof to get the final piece of the Song of Restoration.

In the house behind Angof, there is a crate which can be searched for her diary. Although you cannot take it, you can read it.

Once 50 crystals have been collected, the restoration ceremony will begin. You have the option to sacrifice Eluned as she is a part of Seren, although you can decide not to. Regardless of your decision, Seren will appear, but because she lacks a soul she will collapse in front of the elders. After the elders discuss that she needs to be taken to Freneskae, you can go now or prepare. Once ready, talk to Lord Crwys to progress further.

A cutscene will ensue once you are teleported, taking Seren through Freneskae. As you reach The Cradle, a Force muspah will attack you. Since you are carrying Seren you cannot fight it and will need to avoid their attacks. After a short while, Zaros will appear and banish the muspahs, and will say that it wasn't the right idea to bring her here. He will take you to the Elder Halls as long as you promise not to tell Seren of his appearance.

You are required to direct two beams of light, from the centre, onto the fractured shards at the outer edge of the puzzle. You do this by rotating crystals which refract the beams. The crystals are divided in three rings, an outer ring, middle ring and core ring. If you make the compass point north you can see it clearer and can guess which crystals belong to which ring. Rotating any crystal in a ring turns all the crystals in the ring identically. Rotating any crystal also rotates most or all of the other crystals. The crystals can be turned clockwise or anticlockwise, and there are eight turns in a full circle (i.e. N, NE, E, SE, S, SW, W, NW). Turning each ring has an effect on one or both of the other two rings. The effects will be explained further below.

Turning any crystal anticlockwise simply reverses the above.

Reverse instructions for anticlockwise. If you mess up, you can click on Seren to reset the puzzle.

There are four puzzles in total. After completing each puzzle, a cutscene will occur.

After the light puzzles are completed, more dialogue between Seren and the player will ensue in which more insight to Seren and Zaros's relationship is given. 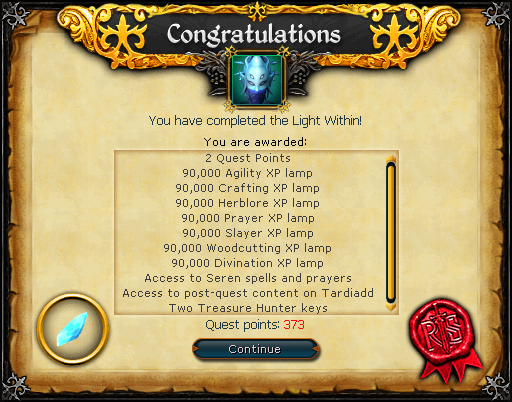 Retrieved from "https://runescape.fandom.com/wiki/The_Light_Within?oldid=14547244"
Community content is available under CC-BY-SA unless otherwise noted.