View source
watch 02:30
Dead Cells Final DLC - The Loop
Do you like this video?
Play Sound
OS
This article is about the quest. For the track, see The Lost Tribe (music track).
[view] • [talk]

The Lost Tribe is the first quest in the Dorgeshuun quest series. Sigmund, the advisor to the Duke of Lumbridge tasks you to investigate into sighting of goblins emerging from a newly formed crack in the castle's basement. The goblins turn out to be the pacifist Dorgeshuun tribe which has been lost from history for many years.

Sigmund is the advisor to the Duke of Lumbridge, but the Duke does not always take his advice. When part of the cellar wall collapses the Duke insists the damage was caused by an earthquake, but Sigmund is worried about a monster attack. If you investigate this mystery, it will lead you through treacherous caves to uncover something lost by the Gods for thousands of years.

To start off, talk to Sigmund, who can be found on the 1st2nd floor[UK] of Lumbridge Castle, in the Duke's room. Ask him if he has any quests for you, and he tells you that the Lumbridge cellar has, presently, a hole in one of its walls and that you should ask the people around for more information about its source.

You must speak to the following people until one of them tells you that they saw a goblin with huge eyes in the castle basement:

Report this to Sigmund and then to the duke. He'll then give you the permission to investigate this matter. If you have completed the quest Dragon Slayer, Sigmund will tell the Duke that you slew Elvarg to help persuade him to let you investigate the cellar.

Skills required: 17 Mining to unblock the tunnel, and 13 Agility to squeeze through.

Go down the ladder in the kitchen and look for a blocked tunnel (named Rubble) and mine it. Make sure that your light source is illuminated, then squeeze through the tunnel. Walk a bit further inside and grab the brooch lying on the floor near an intersection in the tunnel (look for the red dot).

You can also take the path southwest from the brooch spawn and mine out the hole there, with a pickaxe from your inventory, for easier access to the Lumbridge Swamp Caves, which may be useful after the quest. Do not enter the swamp caves for now though, as there are wall beasts and explosive gasses, which can cause a lot of damage to the unprepared. Also watch out not to enter any other paths within this cave, as there are many traps.

Make your way back, and don't look around, otherwise you may fall into a pit. Show the brooch to the duke and Sigmund. They will tell you to go to the librarian in Varrock.

Travel to Varrock Castle, and show it to Reldo, the librarian. He'll tell you to search the bookcases for a book on goblin history. Search the north-western bookcase to obtain the book. Read the whole book to see that the symbol on the brooch translates to "Dorgeshuun, Goblins of the Strong Spears". Keep the book for the remainder of the quest, since it is very important.

To get to know more about the Dorgeshuun, you need to talk to General Bentnoze and General Wartface in Goblin Village.

Choose the options in the following order:

They'll argue about minor things just like they did in Goblin Diplomacy, but eventually tell you more about the Dorgeshuun, saying that they disappeared during the God Wars and have not been seen since. The generals will also teach you the Goblin Salute and Goblin Bow emotes. If you haven't done Goblin Diplomacy yet, the conversation changes, and you are prompted to finish that quest before continuing on.

Go back to Lumbridge and talk to the duke. He will tell you to further investigate the caves for more clues. Go back into the tunnel.

Go to the junction and you will find a 'symbol' on the rock. Read it and if for example, it says "Goblins of the East", go east. Repeat this at all of the junctions: read the symbols on the rocks, translate them with the goblin history book and follow the instructions. Do not try taking any shortcuts in this part.

If you do not follow the path instructed by the rocks, one of two things will happen:

It is easier to change the display options to Minimum as the caves will be easier to see, and thus lowering the chances of getting lost.

When you reach the end, you'll find the Dorgeshuun tribe. Do your goblin bow in front of Mistag. He will tell you that the Dorgeshuun are actually peaceful and the Lumbridge kitchen scare was an accident. You'll also learn about the goblins' backstory. Follow Mistag and he will take you back to Lumbridge.

When you tell the Duke about the Dorgeshuun and their offering for peace, he won't believe you because some silverware had recently been stolen from the castle basement. Pickpocket Sigmund to get a key and unlock the chest located in the next room to find some H.A.M. robes; keep these, as you'll need it for the sequel quest. Speak with the Duke before you leave and he will tell you that he is going to keep an eye on Sigmund.

Enter the H.A.M. Dungeon through the Old Mine Entrance, located north-east of Lumbridge Castle and just across the farther bridge over the river, and search the crate near the entrance to find the stolen silverware.

Go back to the Duke with the silverware in your inventory, and tell him you found it in the H.A.M Hideout. The Duke will fire Sigmund for framing the goblins and will give you a signed peace treaty and tell you to get the leader of the Dorgeshuun tribe to sign it as well.

Go back underground to Mistag. This time, you won't have to navigate through yourself because you'll see a new goblin named Kazgar. He will guide you through the mines, like Mistag did earlier in the quest.

Crossing the mine, talk to Mistag. He'll agree to escort the goblin leader, Ur-Tag to the Lumbridge Castle dining room, with you and Mistag as witnesses of the treaty. In the middle of the signing cutscene, you will find out that Sigmund, clad in full H.A.M. outfit is eavesdropping outside the castle door, but you cannot stop him from laughing cunningly and sliding away. 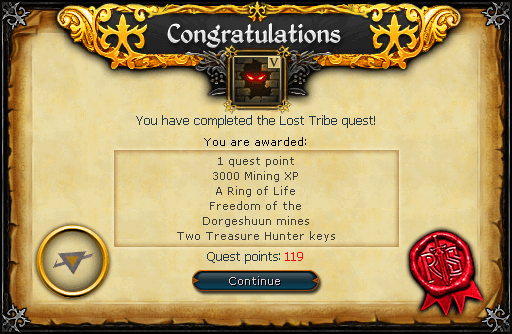 Completion of The Lost Tribe is required for the following: