Start a Wiki
For the actual character, see Aagi.

Wisp colony in the form of a Naragi

The fading memory of a long-dead race.

The Memory of Aagi (later known as Kami) is an adventurer found in a player-owned port. She is a collection of Guthix's memories taking the form of his daughter, Aagi. She can be unlocked by players with level 90 Divination, and once unlocked, she can give special voyages to the player running the port.

Aagi may first appear in the tutorial or a special voyage. She will arrive in the port from a boat, being followed by enemies. After the player and The Partner defeat the pirates, she starts to thank the player and explain to them that she is a colony of wisps, Guthix's strongest memories, coalesced into his daughter. They both state that this is why the diviner, Kakashi, was after her in the first place. The player then assures her that she is safe in their port, and Aagi thanks them.

The player then checks in on Aagi, and she tries to hide the fact that she's feeling something by cracking a Divination joke about how she's trying to "keep it together - quite literally" she feels like she could "explode into wisps or butterflies at any moment". The player notices that Aagi is not okay, and she asks to not be called that name as she is not actually her, but Guthix's memory of her. She admits to feeling the pull of the divination craters, and feels compelled to throw herself in as she is made of divine energy. The player then offers to set up a voyage for her, as there are no craters in the East, to which she agrees.

Upon returning to the port, she tells of her voyage and how they passed and interacted with the Mermaids. She explains how the mermaids were insulting the crew, and she felt an urge to stop them, but it came from Guthix so she dissipated it, and instead she threw a fish at the mermaids. She admits this is the first time she felt like herself, and not Guthix, but she also admits to feeling the pull of the craters again and begs the player to not let her be consumed by them, to which the player agrees.

The player then sets another voyage up for Aagi, as she is still feeling the urge to throw herself in the craters, and almost sleepwalked to one last night. The player then explains how she'll be going to The Fistmarks of Genma in The Hook as his/her captains feel a strange sensation there, and it is farther away from the divination craters and Kakashi, the awful diviner that was after her.

Upon returning, Aagi is ecstatic in the fact that the player was right about The Fistmarks of Genma having a strange energy, and that she met some sirens that called her "Kami" in song. She explains how she likes the name, but they had to leave quickly as Kakashi's ships were on the horizon. She also says that she didn't feel compelled to the craters at all during this voyage. After this voyage she then goes by "Kami".

Part 4: Go With the Flow

The player arranges another voyage for Kami, this time to The Scythe. They explain how Surula's family comes from there, and it would be good to spend some time with them.

When Kami returns, she tells the player that she felt a surge of something as they arrived, the same as she gets from the craters but without the desire to throw herself in. One of the captains told her there are many sea creatures in the area, and she says they must have a strong connection to the Anima Mundi, implying the sea creatures are made of Divine energy as well. She then says she could feel a great sadness within the creatures there. The player expressed their sympathies, but she reassures them in saying it was Guthix's sadness instead. She agrees with these feelings and wants to stop whatever is hurting the creatures. The player warns her this will be hard, as Kakashi is still out there.

Having found out that Kakashi knows that the player is harboring Kami in their port, they warn Kami. The player explains to her the plan to lure Kakashi out, but she needs to be the bait. She agrees, telling them that feeling the sea creature's suffering helped her understand what she needed to do. The player reassures her that it will be only their best captains and some Death Lotus assassins. She expresses that she wants to scare him off instead of killing him. The player agrees and says they'll be sending her to the Glittercaves and spreading rumors she's going to be there.

Upon Kami's return to the port, she exclaims in joy that it worked and Kakashi took the bait. During the exchange, Kakashi swore on the memory of Bandos to leave her alone, and the Death Lotus handed him a red knotted cloth, saying that should she die, he would die. She was also surprised he was human. Kakashi acted as if Kami wasn't what he was looking for anymore, as when he found her she was just divine energy. She also found that the Glittercaves were beautiful, and she could feel the presence of a giant sea creature there. She states she felt a lingering sadness, and fear, and that she wants to understand help the sea creatures.

Kami comes to the player expressing that she had a horrible vision when she slept, that she was a sea creature swimming in The Pincers region near Paradise in a happy pod of others of her kind. She then heard a voice, that commanded her to do awful things. She lost control of herself and did these awful things, and a ball of light fell into the water and exploded. She exclaims it wasn't a dream, but a memory, and the sea creatures are scared of the ball of light. She then goes out to Paradise to connect with the sea creatures and help them.

Kami returns to the port in utter sadness. She explains to the player how they had thought they run aground on reef at first, but they realized it was miles and miles of corpses of sea creatures. She believes someone had massacred them, and swears to find out. Kami then thanks the player for helping her and giving her a home and her own idenity. She states that this gave her a reason to be, and she's going to protect the sea creatures.

The Memory has three clue voyages:

After completing the three clue voyages, a hidden voyage called Life Without Regrets becomes available. At the completion of this voyage, the captain of the trip has one trait removed. The trait is removed in order listed, starting with negative traits.

The Memory's resource voyages are called Transmute the Salvage. They reward the player with chimes and the region's resource or, later in the game, Plates, but do not advance the story line. The adversity and reward vary depending on the region. When Kami offers more than one special voyage, the player must choose between them.

Kami's experience voyages are called Divine Providence. They reward the player with Divination experience, but do not advance the story line. The adversity and reward vary depending on the region.

Kami prefers to work with The Occultist. When both adventurers are at the port, their joint voyages are available in the special voyages list.

Additionally, when all of her, The Tengu and The Exile's story voyages are complete, trio voyages become available when two of the trio are in port together.

Concept art of The Memory 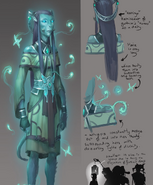 Concept art of The Memory, with notes.
Click an image to enlarge

Retrieved from "https://runescape.fandom.com/wiki/The_Memory?oldid=24565300"
Community content is available under CC-BY-SA unless otherwise noted.