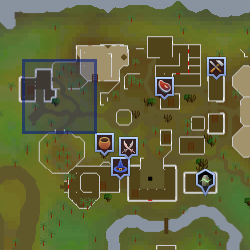 The Monkey's Aunt is an NPC which the player avoids during the Monkey Madness quest, as she is the aunt of the Monkey Child whom you must convince you are his uncle.

She will call the guards who will attempt to capture you and put you back in the monkey jail if she sees you in human form. Fortunately, this will not reset the progress the player has made with interacting with the monkey, so the player will not need to start over when caught. Note that the player will be safe when wielding a Monkey greegree. The Monkey's Aunt can spot you when she is in the small banana patch, even if her back is turned.

Retrieved from "https://runescape.fandom.com/wiki/The_Monkey%27s_Aunt?oldid=24563226"
Community content is available under CC-BY-SA unless otherwise noted.