View source
watch 02:53
GTA: The Criminal Enterprises - The Loop
Do you like this video?
Play Sound
"PoG" redirects here. For the next quest in the series, see The Prisoner of Glouphrie.
[view] • [talk]

The Path of Glouphrie is the sequel to The Eyes of Glouphrie. During the quest, the investigation of Glouphrie's plans continues, and the first glimpse of Arposandra is seen.

King Bolren has a new pet. Unfortunately, it's another watcher, like the ones unmasked in the Tree Gnome Stronghold during The Eyes of Glouphrie. Has Glouphrie been watching the Tree Gnome Village, too? If you investigate further you'll find out more about Glouphrie, the history of the gnomes (and their unusual monarchy) and maybe you'll get within a hair's breadth of the lost city of Arposandra...

To start the quest, you need to go to the Tree Gnome Village. The fastest way to reach the village is by using a spirit tree. After entering the village, talk to King Bolren, who can be found next to the village spirit tree.

The king tells you that he has acquired a new pet, Dumpling, who you immediately recognise as an evil creature in disguise. You try to warn Bolren about the evil spy and explain that it is shrouded by illusion magic, sending all the information back to Glouphrie.

Unsurprisingly, he refuses to believe you, so you must now devise a way to reveal the pet's true identity to Bolren. To do so, you require an anti-illusion similar to the Oaknock's machine used in the preceding quest. Since such a device hasn't been located by the gnomes, the king recommends you to look underground for a local gnome who might know something about an anti-illusion mechanism.

Squeeze through the south-west fence and walk east to a dungeon ladder. Go down and talk to Golrie in the western area of the cave. When you talk to him about anti-illusion devices, he tells you that his grandfather used to travel the world and collect elven items to send it to him as souvenirs. He would keep the parcels and crates he received, in the storeroom located in the other part of the dungeon.

He will tell you to search his storeroom for a key. Go to the eastern-most room and search the stacked crates on the east side as you enter the area. They will be coloured lighter than the rest. (Note: this is *identical* to another key of the same name. They are both called "a key," they both have the same examine text, but only one of them will open the gate.) Once you find the key, go back to where Golrie is and use it on the northern gate. Search the chest to obtain some crystalline disks of various colours. Use the drop trick method a couple of times to obtain more disks. This will provide you with more options when solving the puzzle later on. If you have disks in your possession from the previous quest, the chest may be empty.

Head back to Golrie and talk about the anti-illusion device. He will mention a tunnel in the eastern part of the cave, so head back to the storeroom and crawl into the opening on the northern wall. Note that summoning familiars and pets are not allowed in here.

Once through, you will now have to pass a monolith puzzle. All you have to do is move the four monoliths a specific direction(s) and search all the crates and chests. If you make a mistake, leave the room through the entrance and come back into the room.

Yewnock's device operates on the principle of matching shapes of equal value. The value is determined by the colour of an item and the number of its sides. The machine has two operating panels. The right panel exchanges tokens and the left forms the puzzle.

Each colour of crystal has a numerical value.

The exchanger can be used by inserting higher valued discs in exchange for multiple lower valued ones, or combining two smaller discs into a bigger disc. The total value of the input and output will be the same. Note: To operate the machine, click the desired disc in the inventory, then click the disc slot on the machine interface.

It is possible to not have the correct discs to operate the machine from the chest. To fix this issue, you must exchange the discs using the Oaknock's exchanger until you receive the correct one.

Once you have started the machine, you may safely drop all the discs to free up inventory space. Head back up to the village, and kill the watcher. If your path to the southern tunnel is blocked by the monoliths, you can use the tunnel to the north as an alternative passage back to the cave. Talk to King Bolren again, and he will tell you of a lone gnome named Longramble, who went in search of the lost city, Arposandra, where Glouphrie resides. However, no one knows his location and only Gianne Jnr at the Grand Tree may be able to help.

Use the spirit tree to travel to the Grand Tree. Bank all unnecessary items and stock up on food and armour. 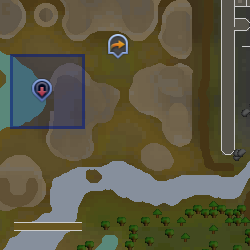 Climb up to the 1st2nd floor[UK] of the grand tree and speak to Gianne Jnr in the north-west corner to learn about Longramble the explorer's whereabouts. He tells you that gnomes have been trying to deliver a dish of tangled toads' legs to him at the coordinates 2 degrees 7 minutes south and 3 degrees 7 minutes west, but haven't been able to get through. You can bring him the tangled toads legs if you want to, but that is not required to complete the quest.

Teleport to the Castle Wars arena and head south, then west alongside the river. Alternatively, you can use the Fairy Ring code BKP and head north-west. Use the crossbow to grapple the tree near the bridge and cross to the other side where you can reach the coordinates.

Talk to Longramble and he will share his findings regarding the sewer, which he believes is proof of gnomish involvement as elves do not pollute their environment. If desired, you can use tangled toad legs on him, and he will reward you with a mint cake. Note that the mint cake does not heal any health, but restores your run energy by 100%. Start heading north to the sewer entrance.

Halfway up, you will come across a dying spirit tree, by the name of Incomitatus. Incomitatus has lost his connection to the Anima Mundi as his roots have been corrupted by black ichor. Hazelmere, sensing your connection to the anima, contacts you and provides a way to heal the sick tree — as elven magic revolves around Seren, the divine aspect of the anima, you must use an object that will 'chant' the anima back into Incomitatus. 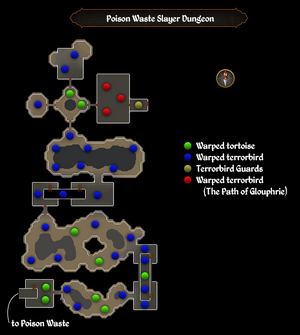 This section contains bright flashing lights. If you are sensitive to light, have seizures, or are otherwise affected by flashing lights, be very cautious in the Poison Waste Dungeon after the terror bird cutscene.

After killing the three monsters, peek through the door on the other side and enjoy a long and remarkable cutscene. Players see terrorbirds Guard no.72 arguing with Guard no. 21, until they detect the player and trigger the traps in the battle room. During the cutscene, do nothing. Players are trapped in the battle room and are dealt multiple hits which do not do any actual damage. Don't try to escape. Wait until Hazelmere appears to help.

Taking any action during the cutscene makes the player appear outside the battle room. In that case, the battle does not need to be repeated. Re-enter the room without trying to escape and wait for Hazelmere.

At the end of the cutscene, players are teleported to Hazelmere's house. Talk to him to complete the quest.

The player is damaged by the magical spells and gasses.

Hazelmere comes to the rescue, and shields the player from the gasses. 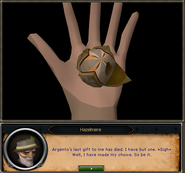 Hazelmere makes the choice to save the player.

At the end of the quest, Hazelmere mentions a vision of the future, when eight will venture out to fight "The Mahjarrat Deceiver", but only two will return, one being a warrior and the other a slayer. He also predicts you to be wearing robes of black and autumn colours, showing loyalty to an order of evil but not belonging to it. This was indeed a vision of what would happen in While Guthix Sleeps. In the quest, the player gathers eight people (including Hazelmere) to fight Lucien and only two do return: Harrallak Menarous the warrior and Mazchna the slayer master. You also wear Dagon'hai robes, which are coloured black and autumn (gold/yellow and red). The Dagon'hai is an evil order, and you only wear the robes as a disguise. In the same vision he also alludes to the death of Guthix by the hands of Sliske during The World Wakes. 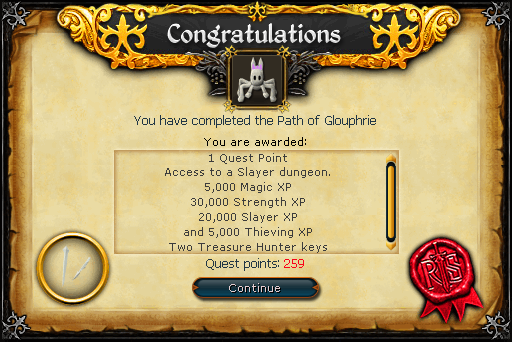 Completion of The Path of Glouphrie is required for the following:

Mind Melding
The unlisted track that plays when mind melding with the spirit tree.