The Red Axe serves as the antagonist in the Rise of the Red Axe quest series. When Hreidmar's face was not put on the giant statue's face, he left the city, taking the Red Axe and an army of chaos dwarves with him, and later made several attempts to conquer Keldagrim. The company allied itself with the Gnomes of the hidden city of Arposandra, who supplied the Red Axe with technology critical to their plans. Gnomish help also included the gift of Grunsh, a brainwashed Ogre Shaman who specializes in memory magic.

They were also mentioned in The Fremennik Isles quest, where it was shown that they were trading with Jatizso, undoubtedly for the ore beneath the city.

In the Hunt for Red Raktuber quest, four dwarves from the Red Axe, Glosur, Medwin, Baden, and Obert, join sides with the KGP because they think the Red Axe took too long to take action. Thus, they took things into their own hands, teamed up with the penguins, and aided them in their plans to take over Gielinor.

According to their archives, the Red Axe had nearly 40,000 employees by the time Grunsh was found. As such, it is very possible the company has since passed that number. 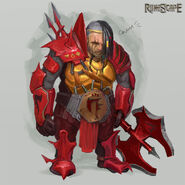 A cart track puzzle in the southern Keldagrim mines, likely controlled by the company.
Click an image to enlarge

Retrieved from "https://runescape.fandom.com/wiki/The_Red_Axe?oldid=18468102"
Community content is available under CC-BY-SA unless otherwise noted.