Start a Wiki
RSCOS
This article is about the quest. For the ghost, see Restless ghost.
[view] • [talk]

The Restless Ghost is one of the first quests introduced into the game, available since the launch of RuneScape, where the player lays a ghost to rest.

A ghost is haunting Lumbridge graveyard.

The priest of the Lumbridge Church of Saradomin wants you to find out how to get rid of it.

To start the quest, speak to Father Aereck, who will tell you that a ghost has been haunting the graveyard behind the Lumbridge church and that he needs help in laying it to peace. He requests that you speak to Father Urhney, who is located in the swamps behind Lumbridge Castle, and is an expert ghost hunter himself.

Exit the graveyard through the southern exit and head through the swamps south of the Lumbridge Castle. Follow the shoreline to a mining area, then head west towards a small hut.

Father Urhney is meditating inside his hut. At first, he will be uncooperative and unwilling to part with his services, but he will eventually hand you a ghostspeak amulet. The amulet allows players to communicate with ghosts, a feat otherwise impossible.

Leave the swampy area and head back towards the graveyard in Lumbridge. Open the coffin located within the gated region adjacent to the Catacombs in the Lumbridge graveyard. Equip the ghostspeak amulet and speak with the restless ghost. He will reveal that he isn't certain why he hasn't departed, but he thinks it might have to do with his missing skull. He tells you that he was attacked by a warlock while he was mining to the south-west, and that is where his head probably lays. He requests you to retrieve it for him. 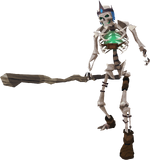 The ghost's skull is located in the Lumbridge swamp, near the south-east mining site. Search the rocks a bit to the east, and the skull will appear in your inventory. Along with the skull, a skeleton warlock (level 7) will also spawn; you can either kill it or simply leave with the skull. Whatever you choose, return to the cemetery where the ghost resides.

Use the muddy skull on the open coffin, and a cutscene will ensue, where the ghost will thank you and then fly off into the River Lum. 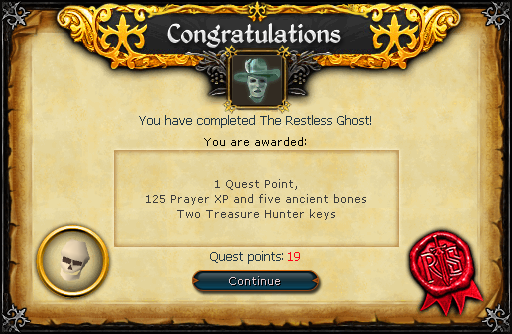 Completion of The Restless Ghost is required for the following:

Retrieved from "https://runescape.fandom.com/wiki/The_Restless_Ghost?oldid=23453378"
Community content is available under CC-BY-SA unless otherwise noted.