The Slug Menace is the second quest in the sea slug series, which involves the player investigating strange occurrences in Witchaven.

The small village of Witchaven was all but deserted when the Fishing Platform was built a short ways off the coast. Now, some of the inhabitants of the village have been acting somewhat strangely....

We have a mission for you...

Head to Falador Park and speak with Sir Tiffy Cashien to inquire about any jobs that he might have.

Along with his ramblings, he tells you about the village of Witchaven, which has had some rather strange goings-on recently. He tells you that since you have been instated into the Temple Knights, you are eligible for a new mission. He tells you to check in with the Temple Knights' local agent in Witchaven, Col. O'Niall, with the password "In Falador, the geese fly backwards on Tuesdays." Sir Tiffy also provides you with an upgraded Commorb v2.

Make your way to Witchaven. A reasonably fast way to get to Witchaven is to teleport to Ardougne and then walk east to the coastal town of Witchaven. Alternatively, you may use fairy ring code BLR to the Legends' Guild and then take a short walk south. The Ardougne cloak 1 teleport to the monastery gives you fairly close access as well.

Once in Witchaven, find Colonel Jake O'Niall rocking in a chair, on the dock, in the north-east corner of town. Talking to the retired member of the Temple Knights reveals that some of the villagers have started acting strangely since about three weeks, especially Mayor Eustace Hobb. He also tells you that some of them are in a dazed and confused state.

If you have not already, ask O'Niall who the important people are in Witchaven. He points you to Mayor Hobb, Brother Maledict and Holgart, the fisherman, who helped you during the Sea Slug quest. O'Niall also suggests that the others may also have some insight into what has been happening to their fellow-mates.

Make sure to finish talking to O'Naill about who to speak to, or they won't give you the right dialogue.

Start off by talking to Mayor Hobb at his house. It is on the west side of town. Mayor Hobb tells you various things, one of which is about a certain shrine dedicated to Saradomin. As you start to leave the house, Savant stops you. She notes the mayor is acting a bit fishy and asks you to scan him. Inside the mayor's house, choose the scan option on the Commorb v2. She gets an odd reading - two life forms from the Mayor - but she is unsure what it means.

Next, head to the church — just south-east of the mayor — and speak with Brother Maledict. He tells you he is worried about his flock, who have begun to act a little bit strangely lately, emulating what O'Niall had told you.

Now, walk a little bit north by the shore, and talk to Holgart. He tells you that the mayor recently confiscated his boat and gave it to another man named Jeb. He also mentions that the fishing platform looks a mighty bit stranger and that you should go take a look.

Report back to Col. Jake O'Niall, and tell him what you have found out so far. He suggests you take a good look at the shrine. Head to the western edge of the village — to the ruins — and climb down the old entrance to get into the Witchaven dungeon, which houses the shrine.

Once you are in the dungeon, look to the minimap. On the east wall, look for a red section indicating a false wall. Choose the Push Wall option to open this section, and then enter the wall opening. You find yourself in a winding tunnel with aggressive giant lobsters that have been possessed by sea slugs.

— and head to the imposing doors blocking your way. Do not try to open the doors or else a flash of light will spring from them, burning your hand for 50 life points.

Savant contacts you via the Commorb v2 to ask you to take a scan of the strange markings on the door. Choose the scan option on the Commorb v2. She says they look similar to some Saradomin glyphs she studied at the academy. She gives you a transcript of the runes to take to Jorral, who can translate them.

Before you go, grab the dead sea slug nearby. It will come in handy later. Savant contacts you about the slug you picked up and does a scan to analyse it.

Travel to Jorral at the Outpost, which is north-west of West Ardougne and south of the Tree Gnome Stronghold. Talk to him about translations. Savant pops up in the Commorb v2 and coaches you on how to get Jorral to translate the message. Eventually, Jorral takes a look at the text and says it refers to a great battle between the temple of Saradomin and an evil creature called Mahey'ish Medron, or as she more commonly called, the Mother Mallum.

After Jorral is done, Savant contacts you again to catch you up on what she has learned about Mother Mallum. Head back to Witchaven, and check in with O'Niall. He suggests you speak with Brother Maledict to see if he knows anything about Mallum.

Approach the church's door, and you see a brief cutscene of the mayor leaving the chapel. When you enter the church, the priest is wobbling around, looking rather ill and acting strangely. Talk to him about what is behind the imposing doors you found and he tells you he has a book that has information on how to keep Mother Mallum trapped, but someone has stolen the three pages pertaining to the shrine's history and it is imperative you recover them immediately.

If for whatever reason you have lost or dropped the dead sea slug, an infinite number spawn outside the door with the strange markings in the shrine. Be sure not to try to pick a live sea slug, however, because it will bite you, dealing 20-30 life points of damage.

Move the three pieces of the page around using the controls over in the bottom-right corner of your screen:

The easiest way to tell if you have got them all on the right side is that the correct side is lighter than the other. The image to the right gives you a general idea of how the fragments should fit together. The third piece may be out of view at the very bottom; select the third piece and click the up button several times to bring it in view.

When you put the pieces in their correct place, the puzzle fragments will close automatically, forming the last page.

Now talk to Jeb on the dock and have him take you back to Witchaven.

Items needed: Commorb v2; page 1, page 2, and page 3; 5+ rune essence or pure essence; an earth, water, fire, air and mind talisman, or their equivalent tiaras. Alternatively, a wicked hood can be used as the talismans, as well as for holding the essence.

It is possible to fail while shaping or empowering an essence and break it, so it is advised to shape them at each altar in case you fail to empower and break the blank rune.

Right click and choose the shape option from the three pages to create a blank rune.

Take each of the blank runes to its associated altar, and use it on their respective altar: the blank earth rune on the earth altar, and so on. Take caution as to not click on the altar, as your essence may be crafted into runes.

Once complete, your inventory should contain special misshapen counterparts of the elemental runes.

Items needed: The commorb v2 and the 5 runes you created
Items recommended: Bring melee equipment to fight a level 51 enemy

When ready, go back to the shrine and return to the imposing doors. Use each of the specially shaped runes you made on the doors to trigger a cutscene. You see that Mayor Hobb tricked you into opening the door so that Mother Mallum could escape. Following the cutscene, you must fight a level 51 slug prince. The prince is not difficult to kill, although ranged or magic-based attacks will bounce right off of it, forcing you to use melee. A slashing weapon is recommended to take advantage of his weakness, with a halberd being the best option as it enables you to kill the prince without taking damage.

If you destroy the commorb and defeat the prince then during the cutscene, Savant will seem to communicate with you out of nowhere!

After you kill the prince, you see another cutscene with Mother Mallum. She threatens to make you her new host, but Savant pops in via the Commorb v2 and teleports you safely to Falador Park. Talk to Sir Tiffy to be promoted to a Proselyte for your efforts.

Mother Mallum expresses her desire to take you as her new host.

Savant teleports you away from Mother Mallum, after multiple failed attempts.
Click an image to enlarge 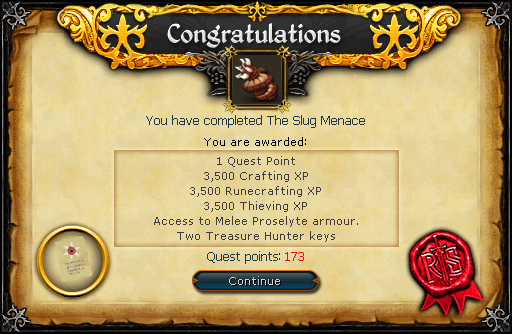 Completion of The Slug Menace is required for the following:

Mother Mallum!
An un-unlockable music track that plays during the encounter with Mother Mallum. It follows the melody of Slug a Bug Ball
Retrieved from "https://runescape.fandom.com/wiki/The_Slug_Menace?oldid=21822722"
Community content is available under CC-BY-SA unless otherwise noted.