The Sound of Guthix

This track unlocks during the While Guthix Sleeps quest. 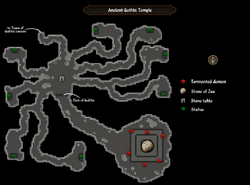 [view] • [talk]
The Sound of Guthix is a music track that is unlocked by going to the Ancient Guthix Temple during the While Guthix Sleeps quest.

The song has a slow, methodical tempo from start to finish, with ever-increasing numbers of instruments coming in. It begins with a steady drum, rainstick, cymbal, and "voice" background, then the first melody comes in, a violin-type lyrical passage, that is repeated later. A marimba joins in the background and later, a similar "saxophone" melody to the "violin" earlier. After this, the piece is mostly repetitions of earlier melodies and harmonies until the end.

Retrieved from "https://runescape.fandom.com/wiki/The_Sound_of_Guthix?oldid=22407492"
Community content is available under CC-BY-SA unless otherwise noted.