The best hunter in the world! 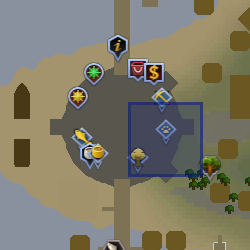 Reginald 'Reggie' Wellington-Smythe the Trapper is a master hunter who is also a tortle shell merchant on Waiko in the The Arc, where he runs Torts R Us. He is an adventurer found in the player-owned port if one has level 90 Hunter.

Previous storyline cutscenes can be replayed by talking to Reggie when he is in the port.

Reginald Wellington-Smythe is an experienced hunter, receiving news from the portmaster's crew that they spotted six or seven unidentified creatures on a nearby island. Reginald is enthusiastic at the thought of a new species to hunt, but the portmaster insists ensuring more are found. Not risking the extinction of the species, Reginald gets ready to leave.

Reggie is ready to head out for the hunt, alone, and heads off. When he returns, he states he hunted down and killed a large chinchompa with a teakettle. When the portmaster asks if he should be hunting a new species, he states he found a creature that ran into a cave and squeezed through a hole he could not pass through.

Part 3: With My Bear Hands

Reggie has heard of an elusive creature, according to the description given to him, a fast and fatal bear. Curious, he sails off. Upon return he was disappointed due to another hunting party startled it, allowing it to escape. The party claims that they were following another animal that could disappear at will, without a trace. Dismissing it as superstition, Reggie claims it is just a well-camouflaged creature and plans to return soon.

Reggie seeks information about his next hunt, claiming that to successfully hunt one's prey, one must learn about it. He joins a ship that is heading out soon. Upon return he states that he spoke with the local villagers that described boar-like creatures and lizards. One thing in common that he inferred from the villagers was that the creature had the ability to vanish without a trace.

Part 5: Warfare Is Based On Deception

Reggie decides to hunt the mysterious creature alone, and seeks to sail to an island where the villagers stated it lived. The portmaster denies him a ship unless he brings backup, and he reluctantly agrees. Upon return, Reggie complains about his backup being useless. However he located some boars, lizards and frogs, who instantly vanished after a bird alerted them. Upon following the tracks of many various animals they seem to lead to rocks and plant life. He begins to plan the next expedition.

Upon studying the information he has obtained of the mysterious creature, Reggie comes up with three possibilities: The creature can teleport, someone is hiding or moving the creatures, or the creatures are shape-shifters. Soon, the Navigator returns with a letter from Reggie, stating that he witnessed the creatures changing form, and that there is only one type of creature on the island. Seeking to catch it and see its natural form, he will only return when he has caught it or when he runs out of rations. Completing this voyage earns 18 pearls and 7 Koi Scales.

Reggie prefers to work with The Assassin. When both adventurers are in port, their joint voyages are available in the special voyages list.

Additionally, when all of his, The Chef and The Architect's story voyages are complete, trio voyages become available when two of the trio are in port together.

Reggie can also be found on Waiko, operating the Torts R Us shop.

Retrieved from "https://runescape.fandom.com/wiki/The_Trapper?oldid=22387287"
Community content is available under CC-BY-SA unless otherwise noted.