You can find another stone fragment by exploring Mazcab.

A relic which could hold ancient secrets. 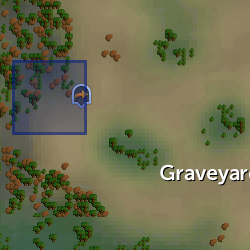 The third stone fragment is found at the entrance of the Nemi Forest at the west of the Goebie graveyard near the Ranger. It is taken to the Ancient statue in the south of Mazcab to unlock lore in relation to the Goebie civilization. Using the fragment on the statue the first time will grant 50 reputation with the Goebies.

The following text is transcluded from Transcript:Third stone fragment.

You feel a faint rumbling in the ground beneath your feet and dust begins to shake off the statue. A voice starts to whisper from within...

You possess a fragment of a vent, one of the distributors of anima that aids the regrowth of ecosystems on this world. The goebies were one an industrious people. Their ancestors carved out arteries and filled them with the planet's life blood, pumped from the heart of their ancient temples. The vents were constructed along these pipelines as outlets, slowly releasing anima to their surroundings and allowing the life there to flourish. This is how life on Mazcab is sustained; a fragile circle in which each element is dependent on the next for its survival. The temple and vents were created by the goebies, the goebies need the flora and fauna to survive and the wildlife in turn relies upon the system the goebies created. The invaders pose a great threat to this delicate balance; if one pillar falls, so too do the rest.