Start a Wiki
Not to be confused with Thak.
Loading...
NormalChristmastimeFremennik SagasPoisonedCrab fists

The self-proclaimed master of Dungeoneering. 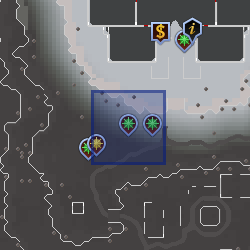 The self-proclaimed master of festivities.

Thok Thokson of Daemonheim is a mighty Fremennik champion at Daemonheim. He is involved with the skill Dungeoneering. He can be found on Daemonheim, just south of the castle, in the Fremennik camp. He is one of only a few Fremenniks that F2P players can meet.

He tells players, when asked about the cape on the stand behind him, that no one believes that he has mastered Dungeoneering, and is one of only two "masters" of a skill to not have completely earned his title (the other being Orla Fairweather of Divination). Thok is currently shown not wearing the cape of Dungeoneering, but the cape is shown next to him on a stand.

Players can check their hard mode progress with Thok via a right-click option.

Thok has a younger brother named Marmaros who writes heavily about their adventures together in Daemonheim in his letters. In Postbag from the Hedge 44, it was confirmed that Marmaros was the Rewards Trader. Thok and Marmaros have a younger sister by the name of Bryll, who can be found in Burthorpe. According to the Dungeoneering journals, he is a follower of Guthix.

Thok makes an appearance in the third Fremennik Saga, Thok it to 'Em, where he is a Playable character. Here it is discovered he has 3800 life points, can wield a primal 2h sword in one hand, can eat rocks and raw meat, uses his head to mine rocks, craft Thok runes and is so strong that he can use powerful special moves (specials like of the dragon weapons) with weapons like a novite pickaxe. It is also shown that he suffers from furophobia, an irrational fear of ferrets. He cannot smelt promethium bars and has a Prayer level below 10.

Thok returns in the fifth Fremennik Saga, Thok Your Block Off , where he is yet again a playable character. The storyline continues off from Thok it to 'Em , as Thok tries to defeat Marmaros in a battle of brawn.

Retrieved from "https://runescape.fandom.com/wiki/Thok_of_Daemonheim?oldid=25380680"
Community content is available under CC-BY-SA unless otherwise noted.