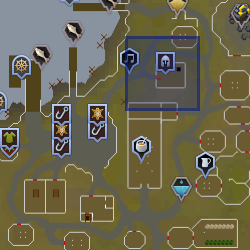 Thorvald the Warrior is crucial in The Fremennik Trials. He can be found in the helmet shop in Rellekka. He sends you to fight Koschei the Deathless. If you win three times and die at the last form, Thorvald will vote for you. It is recommended players bring lots of food for the fight and also a few rings of recoil.

During the 2010 Christmas event, Thorvald appears along with other Rellekkans at the Heimland Games. He wears antlers and tells the player that he pelts Olaf the Bard with snowballs.

Thorvald the Warrior is also the start point to the Koschei's Troubles miniquest, after the Ritual of the Mahjarrat and Blood Runs Deep quests, where he asks you to help Koschei the deathless, as he suspects that there is something wrong.

Retrieved from "https://runescape.fandom.com/wiki/Thorvald_the_Warrior?oldid=24928164"
Community content is available under CC-BY-SA unless otherwise noted.