In the train station in Keldagrim

He sells tickets to Dorgesh-Kaan. 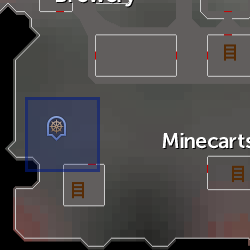 The Ticket dwarf is a dwarf that lives in the dwarven capital city of Keldagrim. He sells tickets to people that wish to use the Dorgesh-Kaan - Keldagrim Train System. His counterpart in Dorgesh-Kaan is the ticket goblin.

The ticket dwarf has been hired by the Mining Consortium, the rulers of Keldagrim, to oversee the sale of tickets to tourists and travellers that wish to travel between Keldagrim and the cave goblin city of Dorgesh-Kaan. As such, he usually sells tickets to dwarves and the Dorgeshuun, although he will sell tickets to anyone that wishes to use the system.

To access the train system, players must have completed Another Slice of H.A.M.. However, as they help to build the train in the quest, the dwarves and cave goblins have agreed to allow them to use the system for free. This basically means that the train system is free to anyone that can access it, and as a result, the ticket dwarf serves no actual purpose.

Retrieved from "https://runescape.fandom.com/wiki/Ticket_dwarf?oldid=24926564"
Community content is available under CC-BY-SA unless otherwise noted.