OS
This article is about the warrior. For other uses, see Tim (disambiguation).

The old gatekeeper to the world of RuneScape.
Please add a map!

Tim is a human warrior that Jagex often used for promotional material on the RuneScape website. Tim is depicted as a warrior with a Tyras helm and metallic armour, and was accompanied by a skeleton named Crunchy. His most famous role was holding the "Low Detail" button before RuneScape HD's release. The two also featured on various other pieces of artwork released by Jagex, as well as on the cover of RuneScape - The Official Handbook.

Tim has a small green dragon pet called Eski. Tim, crunchy and Eski appeared in the 14th issue of Postbag from the Hedge, which first revealed their names.[1]

Tim appears as a bobblehead in the Gower Quest, alongside Crunchy. According to Tim, after the Tim and Crunchy bobblehead pets lost the Player Power poll, it was decided that they would be in the quest anyway, but the wrong concept art for them was used by mistake. They are in charge of overseeing the five Environment artists, and they task players with giving them cups of tea before they help rob the Wise Old Man's bank.

Tim and Crunchy on the detail select screen. 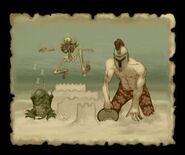 Tim, Crunchy and Eski at the beach. 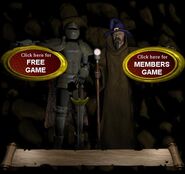 Tim and Crunchy's predecessors.
Click an image to enlarge

Retrieved from "https://runescape.fandom.com/wiki/Tim?oldid=24926017"
Community content is available under CC-BY-SA unless otherwise noted.
... more about "Tim"
RDF feed
Is members only
No +
Store location
Behind the Scenes (location) +