This track unlocks during Between A Rock... 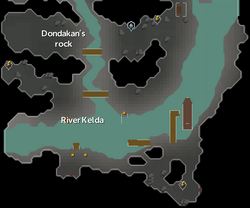 Time to Mine is a music track that is unlocked in the Keldagrim south-west mine.

Time to Mine itself sounds similar in instrumentation and mood to most other track unlocked in Keldagrim, such as Land of the Dwarves and Tale of Keldagrim, but is more manic than those two. The track's name refers not only to the area in which it is unlocked, but also the whole dwarven race's affinity for mining and smithing. It is one of the jazziest tracks in the game, using heavy, sonic saxophone, heavy, fast-paced drums, and other brass sounds that are loud and jazzy.

Retrieved from "https://runescape.fandom.com/wiki/Time_to_Mine?oldid=24925752"
Community content is available under CC-BY-SA unless otherwise noted.