He seems quietly enthusiastic about his profession. 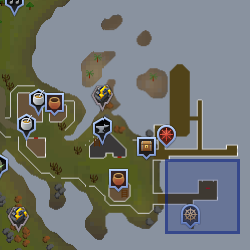 Tindel Marchant is a man who resides at the end of the southern most pier in East Port Khazard. He plays a role in the One Small Favour quest, where he provides iron oxide in exchange for a mattress. He is also involved in the Ardougne Tasks.

Tindel can repair degradable armours such as barrows equipment and ancient armour for the player at a price. The equipment does not need to be fully degraded in order to have it repaired. The cost of any repair is proportional to how degraded the item is. Alternatively, players can repair the armours at a cheaper price themselves at an armour stand in any player-owned house.

He will restore rusty swords and rusty scimitars for 100 coins. They will randomly be repaired into swords or scimitars, ranging from bronze to rune.

Tindel is a Repair NPC - he will repair many degradable items for coins (for a list, see Equipment degradation/List). Like the other repair NPCs, his prices are the absolute most you can pay for repair - an armour stand will always be cheaper.

Retrieved from "https://runescape.fandom.com/wiki/Tindel_Marchant?oldid=24925247"
Community content is available under CC-BY-SA unless otherwise noted.