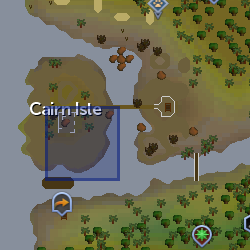 Tinsay is one of the brothers in Tai Bwo Wannai Trio. He is located on Cairn Isle, where it is recommended to have high agility to get across safely. During the quest, he asks for a banana in Karamjan rum, a monkey skin sandwich with seaweed and marinated jogre bones.

Tinsay used to be a priest before he went mentally insane. His insanity was caused, according to his father Timfraku, by some jogres, but he mentions no more of it.

Retrieved from "https://runescape.fandom.com/wiki/Tinsay?oldid=24925121"
Community content is available under CC-BY-SA unless otherwise noted.