To'Kash has a special attack known as "DEEP FREEZE!", which is what he says before utilising it. Note that he also says "Sleep now, in the bitter cold..." beforehand. This move freezes one solid, similar to Ice barrage.

The duration of this Deep Freeze depends on the number of players inside the room; a person soloing this boss can free himself almost immediately (However this is done by To'Kash, so it may be treated as guaranteed damage). When raiding the dungeon with a team of 5, players may find themselves frozen for several seconds. During the period that the players are frozen, they will find it impossible to attack. One person will always be broken free due to the bosses attacks breaking the ice, once done so that player should break out one of his teammates and continue attacking, this cuts down the time that players are locked within the ice blocks and prevents them receiving damage.

Whenever the boss yells "I will shatter your soul!", all players who are not yet broken free after being frozen, will be forced to be freed. The damage is very similar to the attack during which To'Kash claws the first frozen player. All players are dealt unblockable magic damage whenever it happens, but those broken free would have no effect.

The ability Freedom is extremely helpful in neutralizing the special attack.

One can drop a Gatestone outside the boss room and when he yells "Sleep now in the bitter cold" they can teleport out. His freeze ability will do nothing, thus allowing you to re-enter without taking damage from the attack.

Sleep now... In the bitter cold......
Shortly before his freezing special

I will shatter your soul!
Shortly after his freezing special 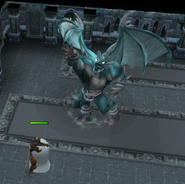 Sleep now, in the bitter cold...

To'Kash's update picture, as seen in the loading screen. 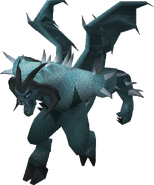 The original version of To'Kash.

The first updated version of To'Kash.
Click an image to enlarge

Retrieved from "https://runescape.fandom.com/wiki/To%27Kash_the_Bloodchiller?oldid=24924288"
Community content is available under CC-BY-SA unless otherwise noted.