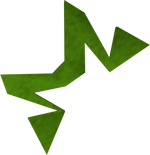 Toad's legs are used in Herblore as a secondary ingredient for an Agility potion, ingredient in Gnome cooking, and edible by themselves to heal a max of 200 life points. Toad's legs are obtained by removing the legs from a swamp toad, found at various swamps around RuneScape such as the one in the Tree Gnome Stronghold.

Toad's legs are used in gnome cooking to cook tangled toad legs, toad battas and toad crunchies which are also used in the Gnome Restaurant minigame. This makes the toads west of the Grand Tree especially useful because of their proximity to Hudo who sells the rest of the gnome cooking ingredients, and Aluft Gianne Jr who runs the Gnome Restaurant.

Retrieved from "https://runescape.fandom.com/wiki/Toad%27s_legs?oldid=24924071"
Community content is available under CC-BY-SA unless otherwise noted.