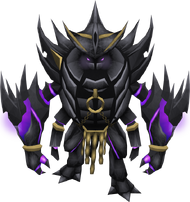 The TokHaar (meaning Sacred-Rock in the TzHaar language) are an ancient race of rock and lava creatures and are one of the 12 Elder Artefacts. The TokHaar were forged by another Elder Artefact, the Elder Kiln, which was made by the elder goddess Ful. The TokHaar were created when the sacred lava of the kiln entered contact with sacred clay. TokHaar appear to be the only truly immortal race known; while gods and Dragonkin do not die of natural causes, they can be killed otherwise, whereas TokHaar will simply return to the lava and be reborn upon defeat. Being Elder Artefacts, they have been hunted for in the past. The only known case of this is Zamorak attempting to obtain them, having already got hold of the Stone of Jas and Staff of Armadyl, but failing due to the death of the servant he sent to the kiln, Perjour.

According to the TokHaar-Hok, the TokHaar were forged in the Elder Kiln by their masters (the Elder Gods: the "designers of this world"), to build the mountains of Gielinor. The TokHaar-Xil were built to dig up the earth and rock, the TokHaar-Mej to blast the earth into a size the TokHaar-Ket could lift, and the TokHaar-Hur to craft the sediment into cliff-faces and slopes.

When their work was done, they built a great mountain around the kiln and returned to live within the kiln, "to await further instruction". However, some chose to remain within the mountain, outside the kiln, tunnelling through it to create cities and mazes. Those that did so have become the TzHaar. The TokHaar dislike the TzHaar for this, believing it is weak, unnatural and against their true purpose.

Because the TokHaar were created to help build Gielinor itself, they and the TzHaar predate the arrival of humans and all other sentient species.

The TokHaar live within the Great Kiln within which flows the lava from which they are all created. The lava rises from the kiln to forge the TokHaar. If a TokHaar is destroyed, it will return to the lava to be forged once more.

Like the TzHaar, the TokHaar enjoy combat, spending a great deal of time practising it. It is for this reason that the player may compete in the Fight Kiln.