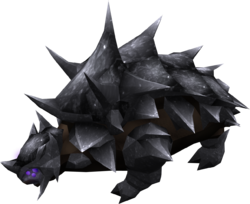 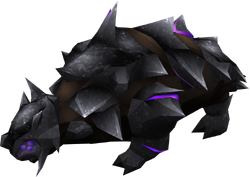 The TokHaar-Ket-Dill is a TokHaar creature featured in the Fight Kiln minigame. It has a protective layer of armour which must first be destroyed by hitting it several times with a rune pickaxe or better. After the armour is removed, it can then be killed normally. It can take anywhere from 12-30 hits with a rune pickaxe to finally wear down its protective layer of armour. Better pickaxes require fewer hits.

Pickaxes on the tool belt work to crack the shell of the TokHaar-Ket-Dill if a melee weapon is equipped.

Volcanic damage enhancer does work on Dills, but, as of 1 January 2015, does not trigger with other monsters in Kiln.

Dreadnips and fighting familiars are able to hit through their armour.

The TokHaar-Ket-Dill has a special attack where it slams the ground like the TzTok-Jad, causing anywhere from 1500 to about 1800 typeless damage when it is inside melee distance that cannot be avoided and hits through prayer and damage absorption. It uses this attack more often if you are praying Protect from Melee or Deflect Melee. This attack is not blocked by the invulnerability crystal.

If you are using the vampyrism aura, try not to attack the TokHaar-Ket-Dills whilst it's active. Doing so will enrage them. This causes them to always slam the ground when they attack you, causing massive damage. This can be particularly deadly when on wave 28 and attacking 6 at once.

If you are using a protection prayer or any other overhead curses whilst attacking, it will cause the TokHaar-Ket-Dill to constantly use its special attack.

One very effective method of dealing with these is to bring Dreadnips with you and attack them from a safespot while letting your dreadnip damage it. As the dreadnip can hit 400s and poison, you can work through them fairly quickly. This can be difficult to use when you have multiple ones coming after you, but it can be safer than meleeing them with a pickaxe. Or alternatively you can use a melee bleed ability (Dismember, Slaughter or Blood Tendrils) and run away. This will break its shell after which you can mage it safely.