Where did his boot go? 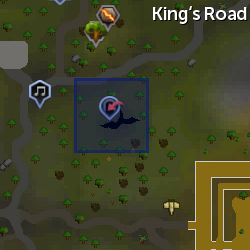 Tolna Talvoy is the child of Launa and Brana Talvoy. When he was young, he left home as he wanted something greater than the farmer's life was offering.[1] He heard rumours of a lost civilisation east of Varrock and went in search of it, but when he reached the site, a rift opened up in the ground and swallowed him.[2]

His parents tried to find him, searching for 25 years.[3][4] Eventually, the rift reopened in either Year 168 or 169 of the Fifth Age, and people began spelunking into it, only to never return.[5] Amongst those to have gone down into the rift was Brana.[6]

An adventurer went down to search for Tolna and Brana. Down there, physical manifestations of Tolna's feelings appeared, and they had to deal with the various angry creatures, the fear reapers, the confusion beasts and the hopeless creatures. When they reached the centre of the rift, they found Brana trying to comfort Tolna, who had been warped into a monster. The adventurer stopped Tolna from killing his father, vanquishing the evil that had corrupted him, and the three of them returned to the surface. He realised his foolishness and made up with his parents,[7] and remained by the rift to warn people of the danger and to guide them to the combat arena that had appeared.[8]

Tolna's monster form acts as the boss of A Soul's Bane, being a three-headed monster. All three level 53 heads must be defeated and can poison the player. However, poisoning one head poisons all heads.