Roof of the Troll Stronghold

It's a leprechaun sunbathing on a mountain. 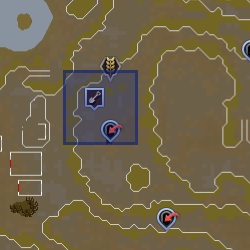 Leprechaun Larry is a tool leprechaun located near My Arm's disease-free herb patch, on the roof of the Troll Stronghold. He's lying in a chair and relaxing, and runs a farming shop, which is the only one that sells cocktail glasses and rocks.

Larry cannot teleport the player to the Vinesweeper minigame, presumably because he is vacationing.

Retrieved from "https://runescape.fandom.com/wiki/Tool_Leprechaun_(Larry)?oldid=24922201"
Community content is available under CC-BY-SA unless otherwise noted.