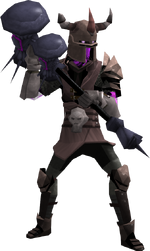 Torag the Corrupted is the second youngest of the six Barrows brothers. Torag attacks with melee and his regular form utilises dual wielded hammers and his shadow form uses a single two-handed hammer. As with all other Barrows Brothers, he should not be taken lightly.

Torag's set effect; Torag's Corruption, causes his attacks to occasionally drain a small amount of adrenaline from a player. This effect is identical to the set effect gained by a player wearing a full set of Torag's equipment. This effect is also accompanied by an animation when activated - a set of purple claws will rise from the floor and clench the player, before sinking back into the ground again within a matter of seconds. This effect is considered more of a nuisance than a lethal effect, as the amount of adrenaline drained is roughly 10% of a full bar and the effect does not occur very often.

Torag's crypt is located in the south-west corner of the Barrows area. His weakness is Water spells, therefore it is recommended to use spells such as Water Surge or Ice Barrage against him, with the latter being useful due to its ability to temporarily bind and stun an opponent, which could allow a player to gain some distance when in combat and avoid being hit as often. He can also be easily taken down using strong melee weapons such Chaotic or Drygore weaponry.

Torag does not drop his main rewards directly; instead, his equipment is added as possible rewards from the Barrows chest. See Barrows#Rewards for more information. However, Torag can directly drop the following items.

Torag returns with his five brothers in Barrows - Rise of the Six, greatly enhanced by Sliske's experiments into the Shadow Realm. As when fought normally, he retains his set effect, and also has various other abilities.

As with each of the other brothers fought in the Rise of the Six encounter, Torag can drag a player into the Shadow Realm.

As with Dharok, Guthan, and Verac, he can perform a spinning attack that rapidly damages close target while chasing his main target.

Torag can use a special ability called Hammerhead where he will pound his target into the ground, dealing 250 damage rapidly, and trapping his target until another player deals enough damage onto Torag for him to let go.

During the 2016 Easter event, Torag the Corrupted and his brothers play a role as the workers (bobble-numbskulls) of Sliske's chocolate factory. They resembled their bobble-head versions.

Torag, along with his brothers, appeared in Sliske's Endgame, being the second intended wave in Sliske's attempts to destroy the World Guardian. However, the Barrows Brothers had managed to regain a modicum of control over their own actions, and chose to aid the World Guardian, attacking Sliske's wights and champions.

The new model for Torag's armour revealed at RuneFest 2011

Shadow Torag wearing a Santa hat during Christmas.
Click an image to enlarge

Retrieved from "https://runescape.fandom.com/wiki/Torag_the_Corrupted?oldid=24921142"
Community content is available under CC-BY-SA unless otherwise noted.