Start a Wiki
For the override, see Replica Torva Armour.

Torva armour is a full set of degradable power armour that requires 80 Defence and 80 Constitution to wear. It was first mentioned on 3 January 2011[1] and released into the game on 10 January 2011[2]. Torva armour pieces are obtained as rare drops from Nex, the boss of the Zarosian stronghold of the God Wars Dungeon, the Ancient Prison. It is the melee counterpart to Virtus armour and Pernix armour, which are respectively Magic and Ranged sets.

A similar set of armour is the Anima Core of Zaros set, which is somewhat cheaper than Torva and has similar stats.

As tier 80 equipment, Torva armour is currently the fifth highest-level melee armour set in the game, behind tetsu, Refined Anima Core of Zaros, malevolent, and Teralith equipment, and the third-best Melee power armour. Torva equipment is the only melee power armour to offer a life points boost.

Wearing any piece of Torva, Pernix, or Virtus armour, or wielding a zaryte bow, will cause all factions of monsters in the God Wars Dungeon (aside from bosses and Zarosian monsters in the Ancient Prison) to be unaggressive.

There are two ways to repair Ancient armour. Players can talk to any of the NPCs listed below and they will repair the items for a price, or repair the pieces themselves using an armour stand in any player-owned house for a reduced cost based on their Smithing level. The equipment can be repaired at any stage, and the cost will be adjusted according to how much it has degraded. The repair costs below are as if the equipment has fully degraded.

The following NPCs can repair the armour:

Item shards are obtained from certain monsters while having CoinShare on. When a rare drop is given by the monster, 120 item shards are divided up among the involved players and sent to their banks. 120 shards can then be combined to give the original item. 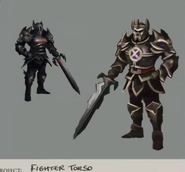 Retrieved from "https://runescape.fandom.com/wiki/Torva_equipment?oldid=24309275"
Community content is available under CC-BY-SA unless otherwise noted.