A labourer for Clan Trahaearn. 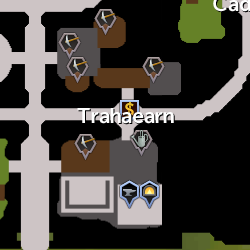 Trahaearn workers are workers that roam around the Trahaearn clan district of Prifddinas. They can be pickpocketed with level 95 Thieving (Or 91 Thieving with the use of an Abyssal lurker with Abyssal stealth scroll), continuing the pickpocket action without need for reclicking until you are caught. Each successful pickpocket rewards 145 experience or 174 experience if the Voice of Seren is in effect, and after you have been caught three times you will not be able to pickpocket them anymore for 20 minutes. During this time, their pickpocket option will disappear, and a grey circle will appear above their heads.

After being caught once the player will receive the message: "You have raised Clan Trahaearn suspicions. 1 out of 3 strikes."

After being caught for a second time, the player will receive the message: "Clan Trahaearn are starting to notice your sneaky ways. 2 out of 3 strikes. They'll catch you next time."

After being caught for a third and final time, the player will receive the message: "Oh dear, they've caught you and they've warned the rest of Clan Trahaearn."

Once the 20 minutes has expired, the player will receive a message saying "Clan Trahaearn has forgotten about your pickpocketing".

Retrieved from "https://runescape.fandom.com/wiki/Trahaearn_worker?oldid=24565156"
Community content is available under CC-BY-SA unless otherwise noted.