Start a Wiki
This article is official lore, copyrighted by Jagex.
This text is copied verbatim from the RuneScape website; the original text may be found here or from a different Jagex source. 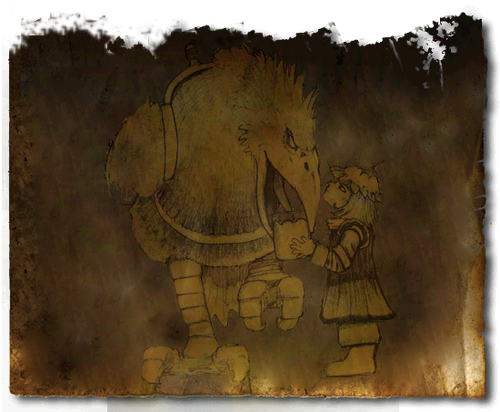 This humorous text dates from a mere few years ago, when gnomes and the people of Misthalin were first beginning to interact. Before the days of the gnome pilots and the gnome ambassadors that have spread gnomish culture across the lands of RuneScape, we had little to do with this enigmatic race, whose humour was so foreign to us.

Judging from this text, it is little surprise that it took us so long to establish correct relations with the friendly race.

In the time before the Grand Tree came into being, the gnomes were planning to co-exist with the humans. For if you trace humanity back far enough, you will find that these two races share a common genealogy. Just don't tell some humans that - they tend to be a bit touchy about any comparisons with their vertically challenged counterparts. The gnomes, for their part, are touchy about this touchiness.

"They just don't like us 'cos they think we're short," said one gnome when questioned, "which is wrong, 'cos we're not short at all. They're just too tall. It's a waste of perfectly good skin."

Gnomes have always been sensitive about their height - or lack of it - and some say that their famous sense of humour is a defense[sic] mechanism born out of insecurity.

We asked Dr. Darius Gnomalus, Head of Psychology at the Gnome Institute of Knowledge, about this. He disagreed vehemently.

"You think I have to make up for my lack of height with cheap gags? You're crazy as a coconut. We gnomes can be very serious individuals, you know."

It was at this point that Dr. Darius's head exploded, sending tiny pieces of gnome everywhere. I recoiled in horror, wondering how such a terrible thing could have happened. Only then did I discover that this was not the real Dr. Darius, but a synthetic model. The good doctor now appeared from behind a potted plant, convulsing with laughter.

"I'm sorry, but you should have seen your face. Absolutely priceless! And I'm a good ventriloquist, yes? You big 'uns are so easy to fool. Maybe the air is too thin up there - not enough oxygen to the brain, perhaps?"

At this point, I terminated the interview.

It was only after storming out in disgust that it suddenly hit me. Maybe the problem wasn't with gnomes, but with humans. Perhaps we do take ourselves too seriously. Maybe it was time to put the humour back into human.

I decided to lighten the tension. I resolved to buy a custard pie, and splat it into the face of the next gnome that I met - just to show that us big 'uns can have fun, too. I would forge a new era of man-gnome relations by being an ambassador of silliness.

Which is exactly what I did. Arming myself with the most custardy flan available, I headed off towards the Grand Tree. Standing at the bottom was a rather funny-looking gnome, who was obviously just minding his own business.

Having found my target, I let fly with the pie, covering his gnomic features with a thick layer of gunk. I burst out laughing, but the gnome remained eerily silent. I thought I'd better explain myself.

"I'm sorry, friend, just having a bit of fun. What's your name anyway?"

Retrieved from "https://runescape.fandom.com/wiki/Transcript:Gnomic_Negotiations?oldid=19553832"
Community content is available under CC-BY-SA unless otherwise noted.