Start a Wiki
This official Postbag from the Hedge is copied verbatim from the RuneScape website. It is copyrighted by Jagex.
It was added on 2 April 2009.

When I was a young head, I would often play card games with my friends and family. My favourite was always RuneScape Duel cards, so you can imagine my delight when I found some in my attic. Enjoy!

We have located the cabbage. It was not there! Rather, Bones sought to make more bones. Flesh remained, however; power did the cabbage grant us!

False victory followed; Bones had taken cabbage and shrouded it within more secrets.

Now we await the lifting of the darkness, seeking to return cabbage to rest.

Anyway, could you drop by the store and get some milk on the way home?

[For the uninitiated, the Chaos Elemental often replies to the more...bizarre letters. On the face of it the words make no sense, but look a little closer - you may find some indication of what the future holds - PP]

Grace brings the pain. The rhythm of blood begins anew.

To conclude: Fay autocrat impugns royal, yet The avatar liberates everyone? FREE! I think this all happens after the time When stars were entertaining June...in Bennath.

The Red Raktuber flies at midnight. (Well, maybe not 'flies'.) Regardless, I'm about to descend into a ventricle of darkness, and I don't know which hat to wear: swordfish, octopus, lobster?

"Wake the muspah. Don't wake the muspah!" - and that's just the first of them! Syzygy nearing: Ritual too. Watch those scopes and learn what you can before it occurs. Ralvash was last, who is next? Me? You? No, we're not one of them.

Now, where are those keys? Ah yes, the keys are left of Mr E Frdrty Wirdy and Mr E, Utrwir Wirdy. What a curious village.

Sheds are heavy; Sirrah is dead.

Why do you let your wonderful creatures, the yaks, be slain in their thousands because of a few players who want quick combat experience? Don't you think it's time to put an end to this madness? I, as a frequent yak killer, thinks that there should be a limit to the number of yaks you can kill, so the race doesn't extinguish!

PS: The limit is for the others and not for me.

You're assuming, good friend, that the yak species is on the wane. Truth is, yaks are prodigious breeders and in no danger of becoming extinct. Your culling is even doing some good, keeping the numbers down before Neitiznot becomes a nation of yaks and a few pet Fremennik.

I would say, however, that you are missing a few yak delicacies by simply killing them. Yak milk makes great (and rather hazardous) cheese, while its droppings will deter even the most persistent ogre. I would recommend a good bit of yak rodeo, too - just see if you can beat my record of 5m 39s!

Have a surströmming day,

When I first entered the realm of RuneScape, a few years back now, there was no Lumbridge Guide. So, it got me wondering: what you did before you became the guide? Were you a warrior? A wise man?

An interesting question, adventurer. The truth is that I have had many professions, although, apart from a time I spent keeping owls, most of them have been scholarly in nature. I have been a teacher of history, a travelling dictionary salesman, an encyclopaedist (I wrote the "g" section of the Encyclopaedia Giganticus), and even, for a brief time, a librarian in the Varrock Library.

Unfortunately, however, Reldo and I didn't always see eye to eye, and, when I suggested that we introduce a magic-indexing system, he got rather cross. That's when I decided to move to Lumbridge, to establish myself as a source of information for travellers. Believe it or not, it is considerably less stressful than being a librarian!

Until we meet again,
Phileas

I hope this letter finds you well, SIR! and that you are holding off the penance waves easily, SIR! I have a few questions I would like to ask, SIR! Firstly SIR! it seems a while since your outpost received any attention from the RuneScape Council, SIR!, and I am wondering if they need to review your finances, SIR! Not to be offensive, SIR!, but your decorations are looking a bit worn down, SIR! and your magicks are fairly outdated!

SIR! Secondly, SIR!, I have a matter that I wish to clear up once and for all, SIR! Many fellow soldiers I have fought against have been spreading a terrible rumour, SIR! They say that using the egg cannon during waves 1- 9 will make the team lose points SIR! Sometimes this story includes a variation in which the penalty does not apply if the collector fires the cannon, SIR! Please dispel this anecdote at once, SIR!

Thank you for reading this letter, SIR!

Right then, you horrible little lot. You listen here, and you listen well. Use of the egg cannon during ANY of the waves of Barbarian Assault, by ANY of the squad, does not, repeat NOT, affect your squad's score in any way whatsoever. In fact, if I don't see one of you maggots up there using it, every single game, you're not doing your best to hold back those Penance waves. Do I make myself clear, private?

As for the decor of the BA cabin, it's harshly decorated for a reason. It's not a holiday resort, son, it's a working headquarters for serious military excercise. As much as you'd like to hang up some artwork and doilies, our appropriations fund goes on the equipment in our dispensors and important egg cannon maintenance.

By order of Captain Cain.

You may recognise me at once, for I am undoubtedly on your most wanted list. I come to express my thankfulness for your services; over the last few years, I have been using you and your men as a shortcut to Port Sarim. I just walk up to you, say I'm an outlaw, you put me in jail, I refuse to pay the price and then - wham! - I'm transported to the so called 'maximum security' prison in Port Sarim. I then picklock my way out, thanks to the sleeping jailguard (I have never seen that man awake in my life) and hey presto: a quick shortcut to Port Sarim! Thank you very much for your services Shantay, it has helped me very much with my travels throughout RuneScape.

Bah! Have those work-dodgers in Port Sarim been sleeping on the job again? There was a time, effendi, when we would administer justice with a blackjack and scimitar; now, you outlaws get babysat by one of Port Sarim's work experience lads.

I know why that Sarim lot do it. Walls, bars, gruel and communal showers can cost an arm and a leg. It's best to stick a sleeping student in office, and let anyone with half a brain cell and a lockpick to blunder through. There's no need to pay for any amenities that way.

But what can I do about it? If I take the law into my hands and lop a criminal's ear off, Osman docks my pay, so I have to limit myself to one ear per month. All that's left is guiding adventurers into the desert, hoping they come unstuck in a smoke dungeon or kalphite lair. They're both quick shortcuts to Lumbridge – why don't you try them? No? Oh, go on.

Shantay, Guard of the Pass

From the Pen of Reldo 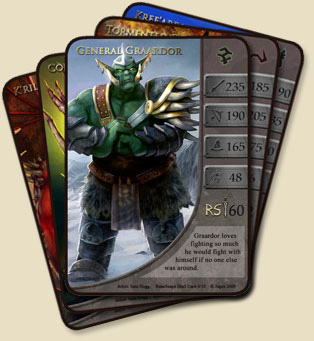 Rather conveniently, I have some old RuneScape Duel Cards from when I had youth, arms and more free time. The ten creatures that Reldo mentioned are present for you to download, print and play with as you see fit! If I remember rightly, the values on these cards aren't exactly the same as they are in RuneScape, but they should give a decent impression of the creature's power.

How Do We Start? - Shuffle the cards together and deal half of them to you and half to your opponent. The dealer plays first.

The card with the highest value wins the duel. The owner of that card takes the losing card from their opponent and moves both cards to the back of their deck. That winning player then reads another value from their next card. RuneScape Duels continues until one player wins all of the cards.

Retrieved from "https://runescape.fandom.com/wiki/Transcript:Who_is_the_greatest_of_them_all%3F?oldid=16501097"
Community content is available under CC-BY-SA unless otherwise noted.