Treasure Hunter is a daily activity where players use keys to unlock chests in order to win prizes. It was released on 4 February 2014 where it replaced its predecessor, Squeal of Fortune.

Players receive a certain amount of keys every day and may obtain more through other methods such as purchasing them or performing certain in-game activities. Each key unlocks a chest which rewards the player with a random prize where each prize has a varying degree of rarity.

The release of Treasure Hunter saw the removal of Yelps and the addition of a new figurehead for the activity: a princess named Alice. These keys can be obtained in the same way spins were. Any unused spins or unclaimed prizes were turned into keys. Rewards from the Treasure Hunter have been rebalanced to be more relevant to player's skill levels.

On 7 April 2014 Treasure Hunter received a major overhaul in which many previously members prizes became claimable by free players. The ability to talk to Alice was also added.

Five chests are offered. Each contains a white, yellow, orange, red, or purple gem. Once a chest is selected, a key is used to open it and the gem containing a prize of the appropriate rarity is revealed. The player is offered the option of placing the prize in the bank or inventory (provided there is space), discarding, collecting later or cashing out for a small number of coins. There are five rarities of prizes, going from most to least common: white, yellow, orange, red, and purple.

Each item has a category, which gives an idea of the item's purpose and function. The categories are as follows:

A player can "freeze" individual categories by using Hearts of Ice, which prevents you from getting any item that belongs to that category. Only skilling categories and the promotional category can be frozen. Up to 10 categories can be frozen at any one time, using a heart of ice each. If a player would have got an item from a frozen category, it will be rejected and another item will be chosen from the remaining items that are not frozen. Every treasure chest opened will deduct from the player's Hearts of Ice total the number of categories that were frozen at the time, regardless of whether or not the item gained was associated with a frozen category. The frozen categories remain selected until the player deselects them. Hearts of ice are obtained automatically alongside daily keys, daily challenge keys, key token redemptions and purchased keys, and five hearts of ice are given for every five spins made in a single reset period.

Near the top-right of the Treasure Hunter interface is the options menu, shaped like a gear. This gives the player several tickboxes with which to change several settings for how Treasure Hunter plays on their account:

Item management is an interface that allows players to see what Treasure Hunter items they have in their bank, separated into categories. From this interface, players can view items and destroy certain unwanted ones. Clicking on items gives information about them.

There are various ways to gain treasure hunter keys, both through gameplay and other means. Whenever a key is obtained, a Heart of Ice will also be obtained as a bonus. Additionally, whenever 5 keys are used in a single day, 5 extra hearts of ice will be given.

Keys on Treasure Hunter are used in the following order:

Free players get one key a day while members normally get two keys a day, and members who bought a silver or gold Premier Club get three daily keys. Treasure Hunter resets every midnight UTC. Daily keys do not roll over to the next day, thus requiring the player to log in and use the daily keys every day for maximum benefit.

Nearly every monster in RuneScape, barring those in minigames or Dungeoneering, has a chance of dropping a Key token. They can still drop if you already have 10 or more earned keys, but you will be unable to claim it until you have less than 10 earned keys.

Players may gain key tokens through any of the same methods that can be used to find a strange rock, in addition to Divination, whether they are a member or not. Unlike strange rocks, a key token obtained whilst skilling with a full inventory will not replace an item of the player's, it will be redeemed automatically or dropped on the ground if you already have 10 or more earned keys.

D&D of the week

The completion of any quest will earn the player 2 additional earned keys. This includes any sub-quest of Recipe for Disaster, Dimension of Disaster, and the Thieving Guild capers.

Players can purchase Bonds for gold coins or cash and redeem the bond for 15 keys. These keys count as bought keys.

Bought keys will expire 12 months after they were bought. 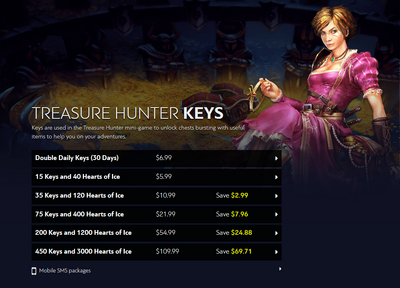 Keys can be earned by watching advertisements, buying products, completing surveys, etc. This is accessed by choosing the "Earn keys" option. Clicking this button will log you out to the lobby while you are using this feature. 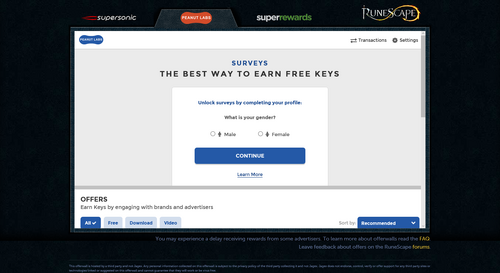 There is currently no promotion running.

Various prizes can be won from Treasure Hunter, ranging from common skilling items, to bonus experience stars, to rare, untradeable weapons. When a chest is selected and the prize presented, it can either be sent to your bank (for most items), your inventory, or converted directly to Oddments

Similar to the controversies surrounding the Squeal of Fortune, some players have expressed concern that the ability to buy experience through the reward lamps that can be won, and pay real money for prizes, is a form of real-world trading.

Major concern regarding Treasure Hunter begun in Autumn 2017, following the release of the Prize Pool promotion. A large number of players argued that Prize Pool was encouraging gambling by allowing players to risk losing their prizes and called for Jagex to respond. Mod Balance responded that Jagex was going to have a meeting regarding microtransactions and would issue a statement soon after.[1] Substantial criticism of Treasure Hunter continued because of the large number of promotions that took place despite Mod Balance's response, including criticism of Mysteria, which features previous promotions on a rotating basis every four hours.

Jagex released a statement on 23 October 2017 regarding the monetisation of RuneScape. In the statement, it is stated that Prize Pool will never be returning to the game, 2nd Chance Tuesday will not be returning for the remainder of the year, and that work has begun on a rework of Treasure Hunter to make the rewards more cosmetic.[2] On 27 June 2018, the Live Events Team (who are responsible for microtransactions in RuneScape) announced some changes to Treasure Hunter in the future, including the Oddments Store being introduced permanently, improvements to Hearts of Ice, and updated prizes.[3]

The interface during 2014 Easter

The interface during 18 September 2014

The interface during 2014 December

The interface during the bonus chest promo

Treasure Hunter lobby button during Talk like a pirate promo

The interface during the 2015 Valentine promo

The interface along with the "reroll" option during 2015 Easter

The interface during the wonder bar promo

The interface during a promotion

Information regarding the current promotion

The interface during the 2nd dragon chests promotion

The Hearts of Fire promotion

The "Flight of the Butterflies" promotion during 2016 Easter

The interface during December 2016.