Prior to the 2018 clue scroll update, after receiving a coordinate clue players were required to locate the exact position (more precisely, the exact square) that the clue scroll indicates. This was accomplished by having a chart, sextant and watch in your inventory and right-clicking on a sextant to display an interface to determine your exact coordinates. The chart, sextant, and watch were, in later years, added to the tool belt. After the 2018 clue scroll update, the sextant interface was removed and replaced with a player animation and a re-display of the coordinates required.

To use a sextant in the tool belt, right click on a coordinate clue scroll and choose the sextant option. If any of the items are missing, the player will not be able to dig up the casket/box at the proper spot. A tool belt spade can be used by right-clicking the clue scroll and selecting Dig.

A meerkats pouch is a summoning pouch used to summon meerkats. Meerkats can be interacted with to provide sextant coordinates. When the appropriate coordinate is located, a fetch casket scroll enables the use of the meerkat's special move Fetch Casket to dig for a coordinate, compass, or scan clue without triggering an attack from a Saradomin, Guthix, Zamorak wizard, Cabbagemancer, Bandosian wild mage, or Armadylean shaman. Digging and retrieving a clue box using Fetch Casket activates the achievement Digging For Treasure. Digging up a clue box without using a fetch casket scroll will not work.

Meerkat pouches and fetch casket scrolls are possible rewards from any Treasure Trails and cannot be made by players.

For hard Treasure Trails, digging on the correct spot will cause a level 70 Zamorak wizard or a level 98 Saradomin wizard to appear, which must be defeated before the next clue scroll or the treasure casket may be dug up. Zamorak wizards use only magic, attacking with Flames of Zamorak. The Saradomin wizard uses Air Surge and Saradomin Strike, and can also use a dragon dagger special attack with a high chance to cause poison. The wizards have no weakness so any combat style can be used to dispatch them effectively. Players who use the special ability of meerkats to dig for the scroll or casket will receive it mitigating the need to fight a Zamorak or Saradomin wizard.

The following map may be used to roughly determine the location of a given coordinate clue: 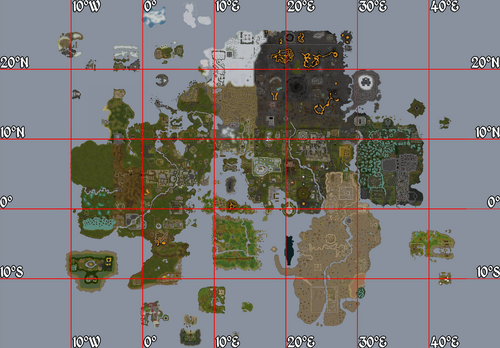 However, precise descriptions for each coordinate clue are listed below.

Following is a list of all known coordinate clues and their corresponding locations. The list is organised into ascending numerical value (for example, 00:00 north first, then 00:05 south, then 00:13 north, continuing accordingly). Shorthand writing is used together with normal writing. An example: 09.34N; 25.12E = 09 degrees and 34 minutes north, 25 degrees and 12 minutes east.

You must have a chart, watch and spade either in your tool belt or inventory in order to complete a coordinate clue.

Note that some of the clues may require skill or quest requirements before you will be able to get to that location. In order to do every Hard coordinate scroll, Regicide, Legends' Quest, Nature Spirit, The Grand Tree and Watchtower must be at least partially completed. Note that some coordinates will need a skill level to do, though the required stat is low.

Retrieved from "https://runescape.fandom.com/wiki/Treasure_Trails/Guide/Coordinates?oldid=25382791"
Community content is available under CC-BY-SA unless otherwise noted.