Scans are a type of Treasure Trail clue that can only occur during elite and master clue scrolls. The first batch of scans came to the game as part of the Treasure Trail update on 4 August 2010, while the second batch came to the game as part of the clue scroll overhaul on 26 February 2018. They can be distinguished from other types of clues by the orb attached to the clue scroll. Scan clues require going to a particular region and scanning in order to find the next clue (or the casket).

Some scans may be found in multiple levels; so far to date, only Dorgesh-Kaan and Brimhaven Dungeon have scans which can be found on multiple levels. If the message "Try scanning another level." appears, players must go to the other level(s) and scan from there.

To start the clue, players must first right-click the scroll and select the "Read" option to find out which region they must search in. They must then go to this region and open the scroll's "Scan" interface to automatically scan the region for the correct spot. Upon starting the scan, a blue pulse appear around the player and "ping".

This blue pulse is extremely helpful for finding the scan's dig spot (it is not affected even if the scan is on another level) and has three stages:

Using the meerkat familiar will increase the scan range of all scans by 5.

When the player is standing on the exact spot indicated by the arrow they can use a spade to dig up the next clue or casket (a spade on the tool belt can be used by right-clicking Dig on the clue scroll). Alternatively a Meerkat familiar's fetch casket special move can be used (this requires level 4 Summoning and fetch casket scrolls). Use of a meerkat's special move is recommended in order to avoid the possibility of a wizard fight:

On 10 July 2017, the Chaos Tunnels were removed as a potential new scan location. However, any existing Chaos Tunnel scan clues remain until they are solved.

Details of possible locations for each region can be found below. The symbols on the maps represent:

- An approximate location or location without an in-game image

To enter the dungeon players will need 875 coins unless they own Karamja gloves 3 or 4 (to gain free access to the dungeon it is not necessary to have the gloves with you). A hatchet is also needed to cut through the obstructing vines within the dungeon (a hatchet on the tool belt will work). Scans will either be on the upper or lower level of Brimhaven Dungeon, if the player is not on the right level for their scan they will be told "Try scanning another level". Players may also find Map:Brimhaven Dungeon showing the dungeon's monsters, useful. 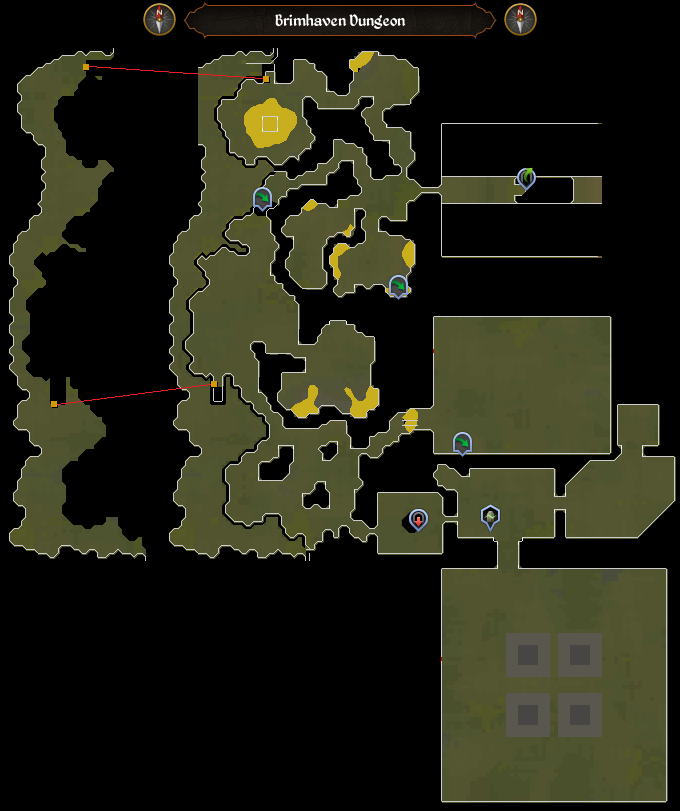 To access Darkmeyer the player must have partially completed The Branches of Darkmeyer.

Fastest way to get here: use Drakan's medallion. To prevent the vyres from getting aggressive, wear the Darkmeyer disguise or the House Drakan outfit (obtained during The Lord of Vampyrium). 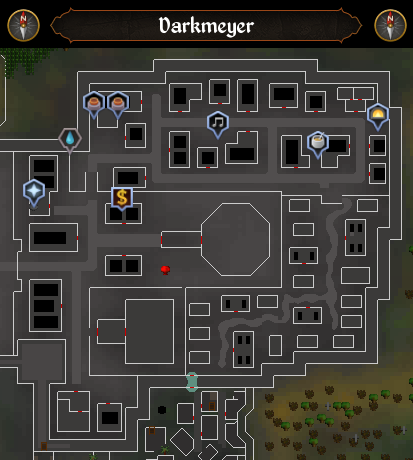 "This scroll will work in the cave goblin city of Dorgesh-Kaan."

Scans will either be on the upper or lower level of Dorgesh-Kaan, if the player is not on the right level for their scan they will be told "Try scanning another level". 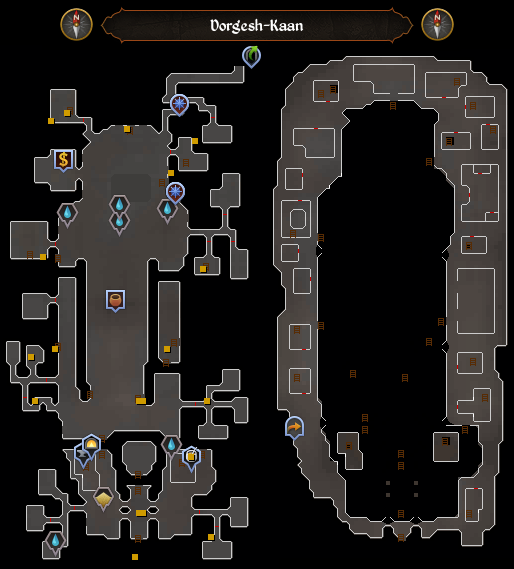 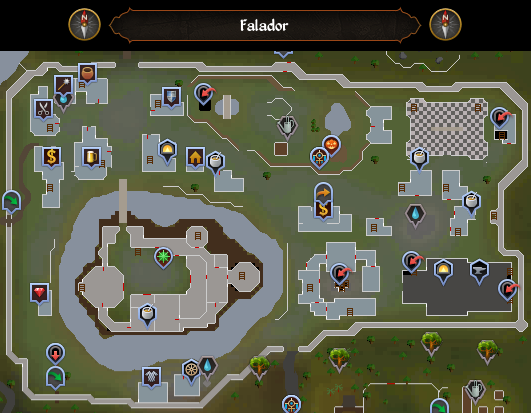 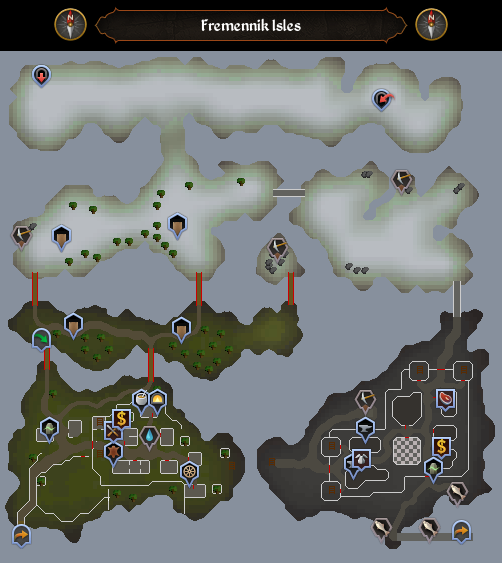 Players may find this map, showing the locations of the dungeon's monsters, useful when navigating the area. 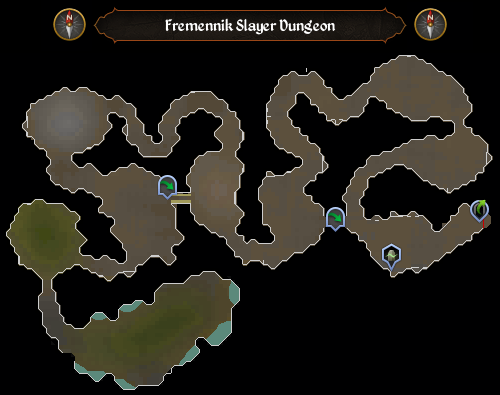 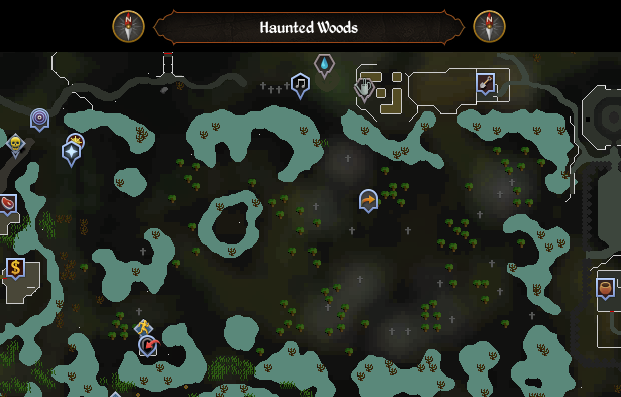 The Heart of Gielinor 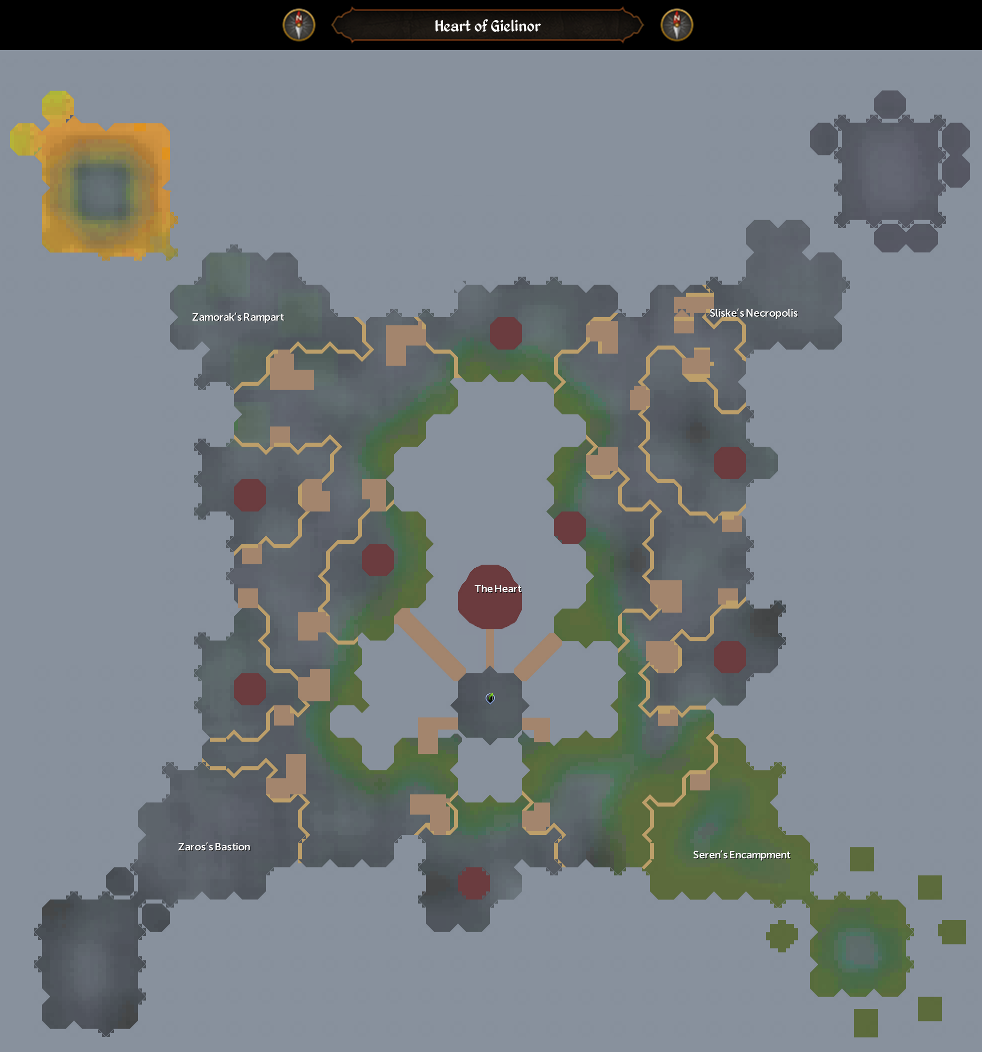 Players may also find it helpful to use this map, showing the routes through and obstacles of Tirannwn, when navigating the area. 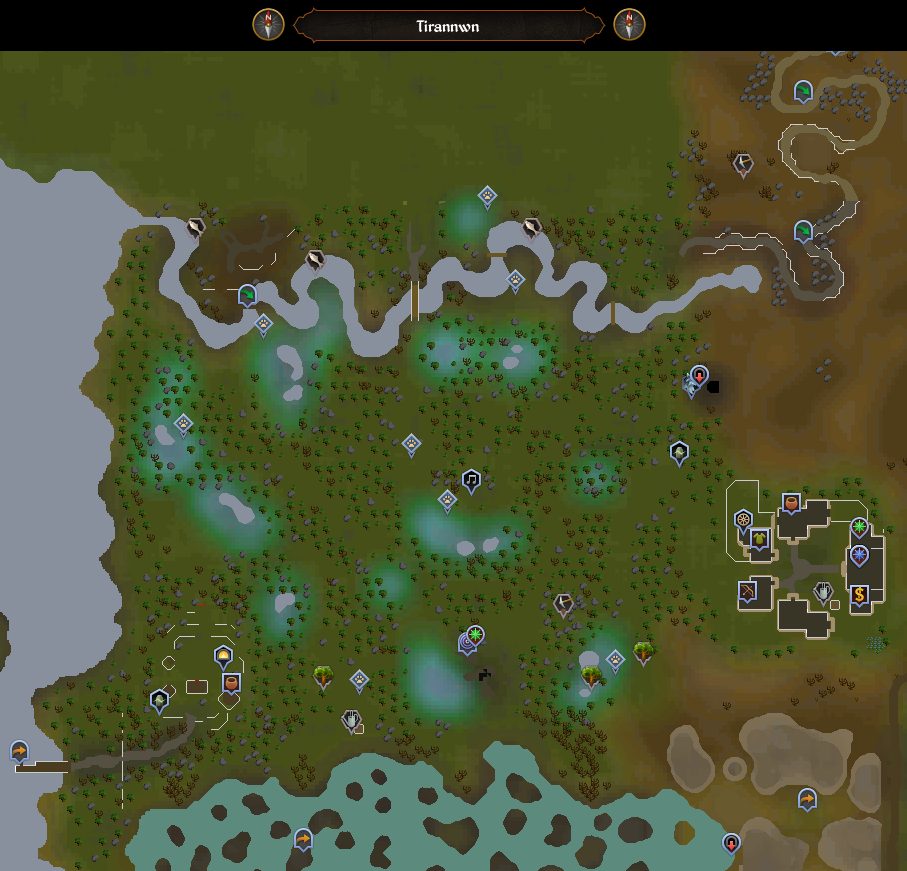 The Islands That Once Were Turtles

Area Information: The Islands That Once Were Turtles 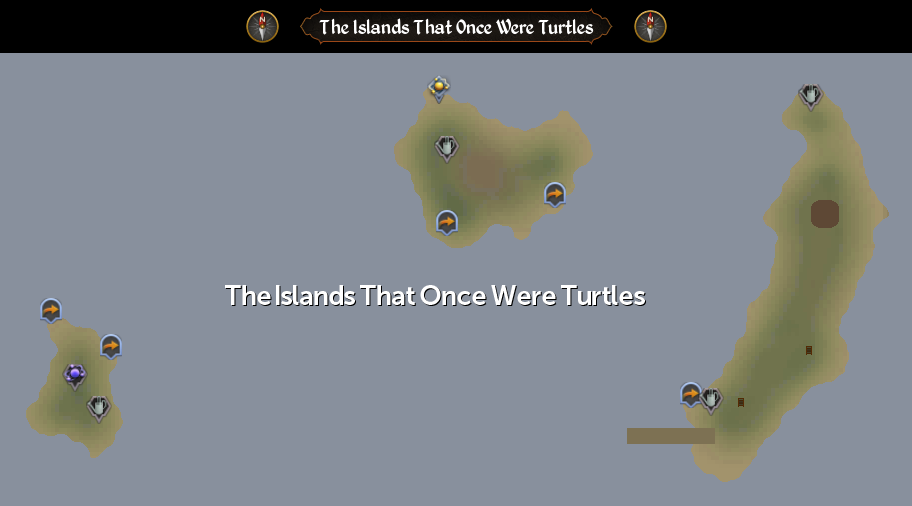 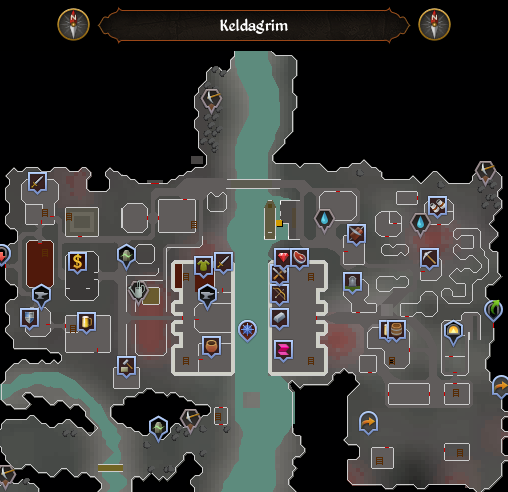 To enter the Kharazi Jungle the player must have started Legends' Quest and have a hatchet and machete (ones on the tool belt will work) to cut through the dense jungle blocking its entrances. The jungle contains aggressive wolves.

"This scroll will work in the desert, east of the Elid and north of Nardah."

To avoid taking damage from the desert heat while in this area players will need waterskins, an enchanted water tiara, or a tome of frost. These are not necessary after the completion of Crocodile Tears. 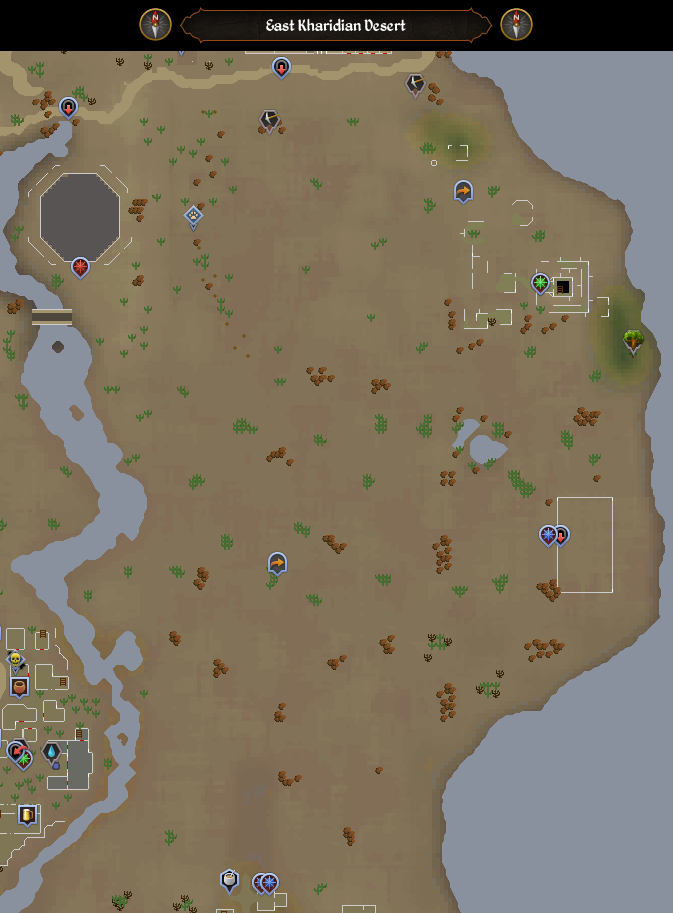 "This scroll will work in the dark and damp caves below Lumbridge Swamp."

While in the caves players must use a light source to avoid deadly, rapid attacks from insects that will otherwise attack them and a spiny helmet or slayer helmet if they wish to avoid taking damage from wall beasts. 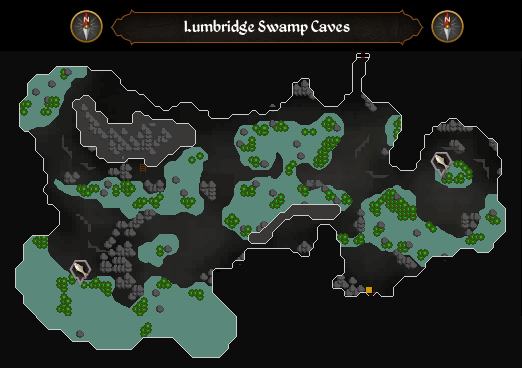 Players must have completed part of The Jack of Spades to access Menaphos. 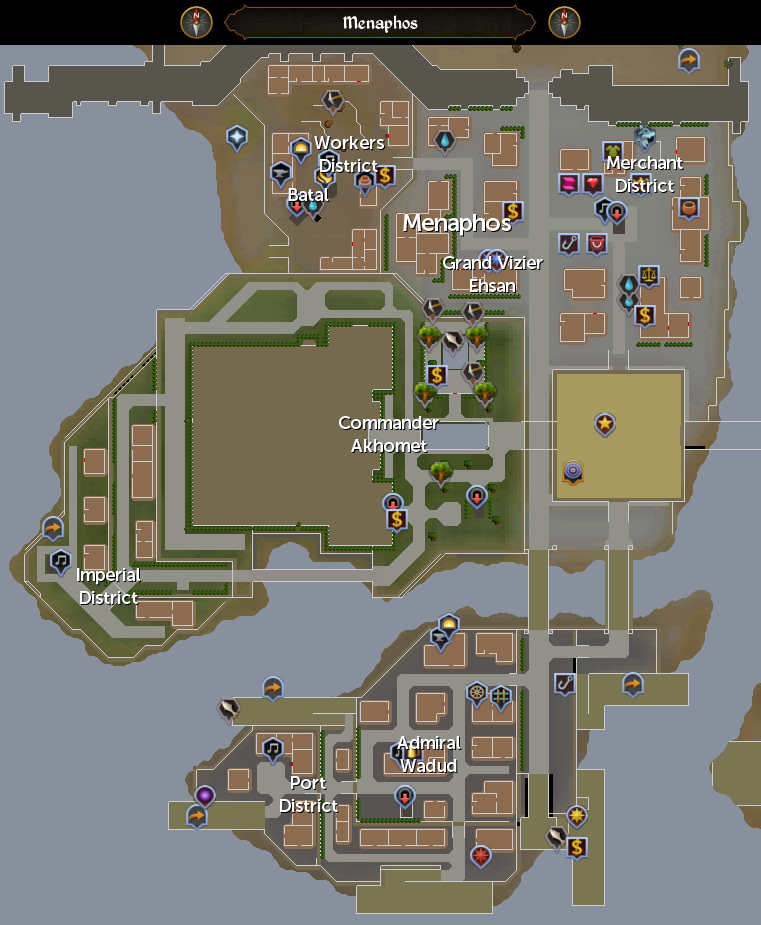