The treasure map is a quest item made during the Ghosts Ahoy quest by combining the three map scraps found during the quest.

Players can read the map to view Dragontooth Island, where a red cross shows the starting point on a north-western peninsula. The instructions read:

To obtain this item, players must have a spade in their inventory. Start one square west of the statue near the landing point on the island, then follow the instructions on the map. The numbers show how many squares to move from the starting position, i.e. 6 squares south, then 8 east, and so on.

When at the final position, players should dig with a spade to find the book of haricanto.

The map also has a right-click Follow option, which can be used to move several paces at once. The player must choose which direction to walk in (N, S, E, W), and then the number of paces (1, 2, 4, 10).

This item is useless after the quest has been completed (unless used for Invention). 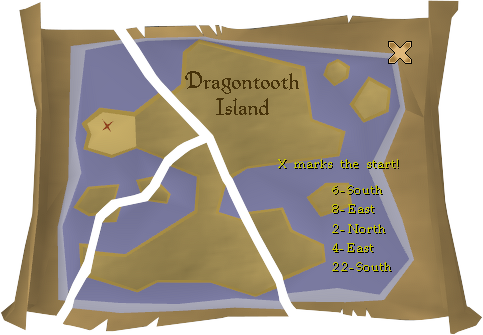