The protected tree is a scenery object that was added as a joke. Long beforehand, an ordinary tree was located just south-west of the Varrock west bank. This tree was, however, abruptly removed following an update on 12 October 2015. The tree's removal caused a lot of attention, and players were quick to blame Mod Timbo due to the Timbo Tree.

As a response to this, a sapling was added on the spot of the tree on 9 November, along with a sign that had the examine: "Protected by the order of King Roald.". The sapling grew into a tree on 16 November, became diseased on 30 November, and died on 7 December 2015.

New dialogue was added to King Roald when the tree became diseased and again when it died. On 14 December, Farmer Jimbo was released and, with him, some additional dialogue.

On 4 January 2016, a new sapling has been planted in place of the dead tree, with Farmer Jimbo looking over it. On 11 January, the sapling grew into a young tree, which in turn grew into a tree on 18 January. The tree grew further on 3 February, and was fully grown on 22 February.

On 21 March, the fence surrounding the tree had been destroyed, with the tree and sign receiving new examine texts. However, the tree was still unable to be chopped down until 29 March 2016. 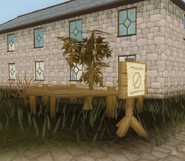 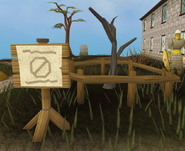 Click an image to enlarge
Retrieved from "https://runescape.fandom.com/wiki/Tree_(protected)?oldid=20728515"
Community content is available under CC-BY-SA unless otherwise noted.