RuneScape Wiki
Register
Don't have an account?
Sign In
Advertisement
in: Cities, Locations, The Grand Tree,
and 2 more
English

View source
watch 02:34
Fire Emblem Warriors: Three Hopes - The Loop
Do you like this video?
Play Sound
RSCOS
This article is about the stronghold. For the village, see Tree Gnome Village.
"TGS" redirects here. For the miniquest, see The General's Shadow. 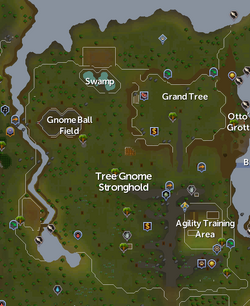 The Tree Gnome Stronghold, also called Ta Quir Priw in Gnomish, in the kingdom of Kandarin is one of the largest cities in RuneScape, spanning quite a large area, and is populated solely by gnomes. Its most notable features are the Grand Tree, the Gnome Stronghold agility course, and the Gnome Ball field. It is the capital of the Gnome Empire, being the only major settlement of the Gnomes (with the exclusion of Tree Gnome Village), it plays a key role in the empire.

There are many ways to get to the Stronghold, and it connects to a number of useful transport networks.

There are three convenient banks in the Stronghold. One is located on the 1st2nd floor[UK] of the Grand Tree, and another is to the south and to the west of the agility course, conveniently near the yew trees, magic trees, and flax.