Start a Wiki
RSCOS
This article is about the city. For the quest, see Tree Gnome Village. 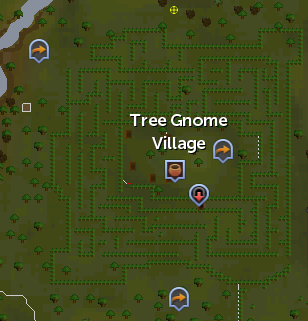 The Tree Gnome Village, also known as Priw Gnomo Andralo in Gnomish, is the home of the Gnomes. It is primarily a giant hedge maze (Tree Gnome Maze), at the centre of which lies a civilisation. To enter the village press squeeze through loose railing. If you talk to Elkoy he will lead you through the maze, saving a bit of time.

Here is a list of creatures that inhabit the maze:

Retrieved from "https://runescape.fandom.com/wiki/Tree_Gnome_Village_(location)?oldid=23178471"
Community content is available under CC-BY-SA unless otherwise noted.