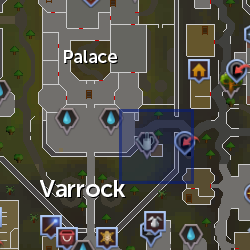 Treznor Withings the Grubby is the man who looks after the wood tree farming patch in Varrock. As Treznor is part of the Group of Advanced Gardeners, players can use him as one of the five gardeners they must speak to during the Fairy Tale I - Growing Pains quest.

Despite being in the uniform of a Varrockian guard, he is not attackable and helps you look after your farming patch. According to the Varrock Census, he was a kitchen boy in the year 160 of the Fifth Age.

Treznor is featured in Postbag From The Hedge #11.

Treznor also sells basic farming tools, which can be accessed by talking to him and asking Can you sell me something? It is not an actual shop and it has no set stock; each item has to be bought individually through the dialogue.

Retrieved from "https://runescape.fandom.com/wiki/Treznor?oldid=24562933"
Community content is available under CC-BY-SA unless otherwise noted.