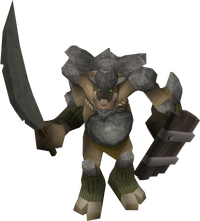 Troll generals are huge and powerful giant trolls that live in Troll Stronghold, on the top floor.

Troll generals have a reasonably high drop rate of nature runes. This can be advantageous for players wishing to high alch drops such as steel platebodies for profit, and for players using prayer via the Ardougne cloak/Trollheim Teleport prayer restoration method. Utilising these methods, players can remain here for limitless hours collecting noted drops and high alching cheap weapons and armour for profit, however for profit alone, there are more profitable alternative methods of training. Furthermore, herbs can be noted with the Tool Leprechaun on top of the stronghold, provided that My Arm's Big Adventure has been completed.

As a slayer task, Troll generals are a convenient, higher-level choice when assigned trolls. They have a reasonably high drop rate of nature runes and weapons and armour, including the occasional granite shield. Furthermore, they provide a very easy 89.4 slayer experience for medium-high level players, providing the recommended prayer method is used.

Players with 50+ Magic and Defence should have no problem killing these quickly and safely, using only Regenerate or other healing abilities in the place of food. With fire runes for alchemy, and utilising the Tool Leprechaun to note dropped herbs, such players could remain here indefinitely.

Troll Generals have surprisingly low accuracy. Nevertheless, high levelled melee armour is still recommended if using melee, as they can hit very hard for their level (over 350). Therefore, use of the Protect from Melee prayer or Deflect Melee curse is strongly recommended for players with low defence. It is possible to use magic attacks on the generals safely, as their large size allows them to be corner safe-spotted. It is possible to poison them, run out of their range, and let the poison do most of the work.