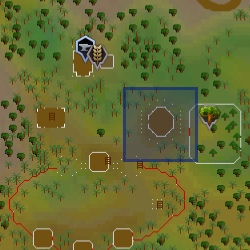 Trufitus Shakaya[1] is the shaman of Tai Bwo Wannai. Due to recent events, the people of the village have abandoned it, and he must contact the gods to find out what to do by using a special potion brewed from various herbs. He requests an adventurer gathered these for him, telling them where each herb is located. In exchange for their aid, he shows them some Herblore techniques.

While investigating the problems of Shilo Village, he acts as a source of information after being given a wampum belt. He tells the legend of Rashiliyia, the queen of the undead, and of her burial place, Ah Za Rhoon. He later provides information on Bervirius, Zadimus and several items. He also helps the adventurer with ideas of what to do next.

Retrieved from "https://runescape.fandom.com/wiki/Trufitus?oldid=24562435"
Community content is available under CC-BY-SA unless otherwise noted.