Turkeys were part of the 2009 and 2010 Thanksgiving event and were found in a pen near Fred the Farmer's house. Even though they were level 138, they were very inaccurate and low-hitting. Killing turkeys did not give any experience except in the 2010 edition where burying the bones lead to a minimal addition in prayer experience. In order to face them, players were given gravy from the Gravy Boat of Saradomin by the Cook's brother. This allowed players to deal damage high as 1999 (or 199 in 2009 before the life point update) in one hit, regardless of players' stats, equipment, and combat level. They were easy to kill but it would have taken a few minutes to slay all the turkeys in the field. If the player left the area of the turkeys, 10 new turkeys would respawn after the player entered the area again.

They dropped raw turkeys and normal bones; however, the Cook's brother stopped any players from picking the raw turkey up. 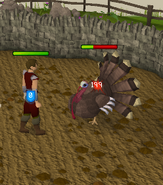 A player hitting the maximum damage possible for one hit. (2009) 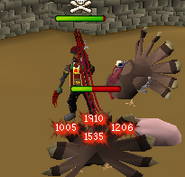 A player using dragon claws for a total of 5656 life points.
Click an image to enlarge
Retrieved from "https://runescape.fandom.com/wiki/Turkey_(2009_Thanksgiving_event)?oldid=20239479"
Community content is available under CC-BY-SA unless otherwise noted.