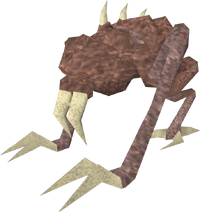 Turoths are Slayer monsters that require a Slayer level of 55 to kill. They frequently drop herbs and herb seeds. Turoths, like Kurasks, must be killed with certain weapons (listed below).

They attack with Ranged and typically hit for damage in the mid 100s. They don't hit as accurately as similarly levelled monsters, but when they do hit, they usually hit high. They are weak to stab, but can be easily killed with both Ranged and Magic.

The Fremennik Slayer Dungeon is by far the most popular location to slay turoths, and having 81 Agility can help reduce the time taken to get here. There is a fairy ring located outside the dungeon for quick access, code AJR. There are a lot of level 64 and 66 turoths, three level 69 turoths, and one level 68 turoth in this spot, allowing players to kill turoths at a fast and efficient rate for their slayer task. It is also a good spot to train farming if the player owns a Seedicide and has a farming level of at least 74. The lodestone to Fremennik Province can be used to reach the cave quickly if the player does not have access to fairy rings. Alternatively, if a player has a Mask of the Aquanites, they can use it to teleport inside the cave twice a day.

If players are farming charms, the Chaos Tunnels are the best place to hunt Turoths. However, the tunnels are a maze and difficult to navigate through. Malfunctioning portals can set you back, and some rooms may be filled with dangerous monsters. Players should not use the Chaos Tunnels if they are expecting to kill Turoths in large amounts. The Turoths room is extremely tiny, there is a lack of level 64 Turoths, there are no level 66 turoths, and a lot of level 68 to 71 Turoths in there.

Players can fight turoths at the Pollnivneach Slayer Dungeon after fighting the Mightiest turoth in the Desert Slayer Dungeon miniquest (requires Smoking Kills). The location is especially useful if your slayer master is Sumona, who is located just above the dungeon, so you can get a new task fast. However, due to the dust, anything apart from a full or regular slayer helm or masked earmuffs would not be recommended. Turoths of all levels reside in the first room, while in the second room, level 68-71 turoths reside there. This place is usually empty of players, making it perfect for attacking many at a time. A Dwarf multicannon cannot be used, as it does not do any damage to them.

Turoths must be killed with one of these weapons:

Turoths in the Fremennik Slayer Dungeon
Click an image to enlarge

Retrieved from "https://runescape.fandom.com/wiki/Turoth?oldid=24921483"
Community content is available under CC-BY-SA unless otherwise noted.